Michael Lau, the popular Hong Kong artist and toy figure pioneer will open his latest show at the Living Room Museum at Times Square on Wednesday, March 9th. Titled “What? We: Want!” the subject of the exhibition is our growing dependency on a digital lifestyle.

We have covered Michael Lau on several previous occasions, including his collaborations with Nike and Diesel, along with an earlier project with Times Square. The venue for the new exhibit is the Living Room Museum, which sits directly on the busy thoroughfare in front of the shopping center.

Though the Living Room Museum is just an enclosed space in front of the mall, it offers massive exposure for the artist and an opportunity to connect directly to the Hong Kong public.

Times Square has one of the most successful and progressive art programs in Hong Kong. They continue to win goodwill among the general population by bringing frequent exhibitions to Causeway Bay. Although they certainly lean towards the commercial side, often doing tie-ins with films, the exhibitions succeed in capturing the public’s attention.

A recent standout was a larger-than-life Star Wars Lego collaboration that featured a huge X-Wing Fighter, an At-At, and several other large-scale objects from the classic film. In addition to contemporary Pop art, they also showcase more traditional work and even embrace items of local and historical interest.

Times Square can’t be accused of not maximizing their space. The contemporary sculptures often take over the ground floor and cause passerby to pause and take a look, or snap photos on their way to eat or shop. While the programs range in style and medium, they have put together an impressive number of shows, and also showcased a good number of local talents. 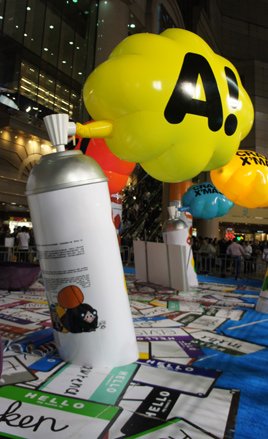 Until the new M+ museum opens in West Kowloon, it might be possible to say that more people will engage with an exhibition at Times Square than at most of Hong Kong’s art institutions.

Michael Lau’s “What? We: Want” exhibit explores the current state of our digital addiction. Hong Kong, perhaps more than other cities in the world is seeing shifts in society based on our preoccupation with our digital lives. An early adopter of smartphones and new technologies, the city is a Petri dish for the effects of technology unleashed on an urban environment.

Several factors make the city particularly obsessed with a digital world. First, there is mobile Internet available everywhere including on mass transit such as buses and trains. Second, it’s safe to use your device anywhere at any time. Third, a majority of people are on messaging platforms and social media, as Hong Kong is made up of citizens often with friends and family overseas. Fourth, Hong Kong people are concerned with ‘face’, and the new way to gain face is via your digital stream, sharing images from your “wonderful” life. Fifth, Hong Kong people love shopping, and they have access to China’s Taobao, as well as the very best of American and European online stores.

These factors combine to make a digital lifestyle imperative for many of the city’s inhabitants.

If you take a ride on the MTR, you will see that a good fifty to seventy percent of the passengers are engrossed in their mobile device during the commute. Savvy observers will recognize that this has real-world drawbacks and consequences.

The commute is often plagued by people absorbed in their personal digital world, not observing what’s around them, often slowing down access to the trains and less likely to offer their seat to a person in need.

Outside of transportation, and individuals walking down the street staring at their phones, another common issue is that people appear to be living to provide content for their digital feeds. In this scenario, the appearance of having a great life is more important than actually enjoying the moment. Everything is a photo taking, filming, or social media opportunity.

What! We: Want! explores a highly relevant subject and concerns an issue that is adding to, and not alleviating pressure in Hong Kong.