Drone pioneer DJI, arguably one of China’s coolest companies, is opening a Hong Kong flagship store in Causeway Bay on September 24th. Part gallery, showroom, and community center, the 10,000 square foot shop is an anchor tenant in the new Tower 535 at the end of Jaffe Road.

DJI is the international market leader in drones and continues to attract everyone from artists and hackers to filmmakers and hobbyists with their innovative products. Frank Wang, DJI founder and CEO, got his start in Hong Kong, and initially sought to build the company here in H.K., before receiving a better offer from nearby Shenzhen. The opening of the DJI flagship store in Causeway Bay marks a triumphant return.

DJI appears to be taking a strategy from Apple’s playbook, creating a temple for all things drone-related in fashionable, high-visibility locations. In a city known for its shopping, Causeway Bay is one of the most sought after locations because it’s popular with both locals and visitors from abroad. The new Tower 535 is a stylish addition to the neighborhood, and has been attracting on-brand tenants including a co-work space, a top-notch seafood restaurant, and a craft coffee shop.

Hong Kong joins Shenzhen and Seoul, as the third city to host a DJI flagship. The three-story shop includes an indoor flying zone and room to hold workshops. 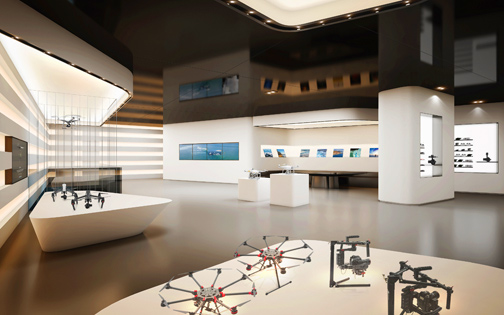 Besides drones, DJI has a wide array of products based on the innovative tech they developed while solving technical problems in aerial systems. One of their newest hits is Osmo, a hand-held device that’s something like a steady-cam, yet also features motion tracking. Essentially, it turns your smartphone into a next-level video camera that allows shake-proof, always-on-target shots. At the same time, it’s also like a self-correcting selfie-stick that you can set to always capture your body or face.

DJI is one of the few Chinese companies that has become a premium brand in foreign markets. It counts top filmmakers, scientists, and sports teams among its many fans. Although China produces many of the world’s most desired products, a homegrown brand that achieves world-wide acclaim is much less common.

DJI set up a special site with a countdown running until the Hong Kong flagship store opens. Have a look at the DJI Live site for opportunities to join the festivities on September 24th.

The shop is located at the end of Jaffe Road, next to World Trade Centre, Causeway Bay MTR Exit D1