G-Dragon, K-Pop icon and member of super-group Big Bang has raised eyebrows by posting three movie clips and an image from Wong Kar Wai films on his Instagram account. While it may be just an innocent move, the posts have led to speculation that the Korean star may be collaborating with the acclaimed Hong Kong director in the near future. Would a G-Dragon x Wong Kar Wai project be a smart move?

At first glance, the multi-talented Korean entertainer would seem to be a perfect fit for the Hong Kong filmmaker. In addition to G-Dragon’s musical abilities, he has a strong stage presence and a talent at constantly reinventing himself. Additionally, he’s got a massive fan-base that would be a benefit to any film’s box office ambitions.

A collaboration with the stylish Hong Kong director would be a major opportunity for G-Dragon as well. Wong Kar Wai is highly respected in the international film community and has amassed a cult following for his films. His movies often contain top-notch performances, superior art direction, memorable music, star-studded casts, and heaps of cool.

Is it a hint, or just coincidence?

Glancing over G Dragon’s Instagram account, he often shares discoveries from the worlds of music, art, and fashion with his followers. In the past he has highlighted other musicians such as The Weeknd, and style leaders like Karl Lagerfeld. Another recent post showed a video of his visit to the new Stanley Kubrick exhibition that opened at the Seoul Museum of Art.

However, his string of four Instagram posts that feature Wong Kar Wai films “Chungking Express,” “Fallen Angels”, “In the Mood For Love” and “Days of Being Wild” looks like the result of someone doing their homework before working with the director. As an artist’s social media is such prime real estate, it’s rare for an entertainer to dedicate four posts to any one topic – especially something that they’re not intimately involved in.

Wong Kar Wai hasn’t put out a film recently and a movie together with G-Dragon would be a major box office draw. It might also be a solid match from an artistic perspective as well. The director has an improvisational style and a deep commitment to the art of filmmaking. His work is lauded by film festivals and has won the admiration of Hollywood directors, including Quentin Tarantino, who brought “Chungking Express” to wider audiences.

Being able to star in one of Wong Kar Wai’s films is a sought-after opportunity. Wong Kar Wai has proved talented at harnessing (and capturing) both the swagger and subtle cool of actors on the big screen. His films with Tony Leung Chi Wai, Leslie Cheung, and Takeshi Kaneshiro have produced some of their finest acting and most memorable scenes.

The combination of these two accomplished talents collaborating together would potentially be box office gold with pan-Asian appeal. A film by the two would play well in regional markets including China, Hong Kong, Korea, Japan and Thailand.

Collaborating with G-Dragon brings Wong Kar Wai a new audience as well as strong grassroots support for an upcoming film. For a quick demonstration of the social value that G-Dragon can provide, there were over 300,000 likes on his “Chungking Express” Instagram post, with 250,000 on the other three. That’s over 1,000,000 ‘likes’. 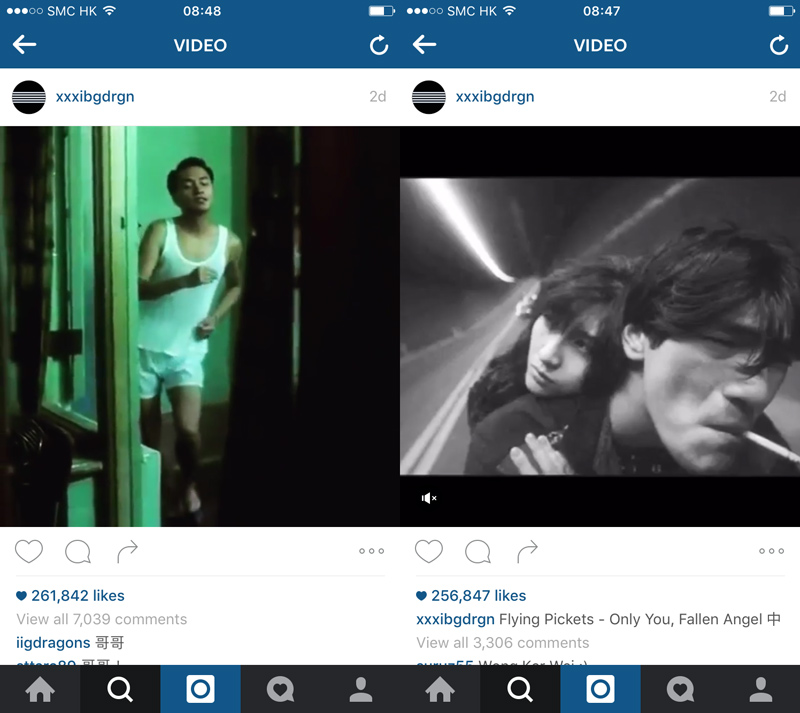 An additional element that the two share is a passion for music. Wong Kar Wai’s films are perhaps the best in all of Chinese cinema in their use of music. Whether it’s original compositions, or simply selecting interesting songs to match the moods onscreen, the Hong Kong director has been able to conjure movie magic repeatedly.

A collaboration between the two would likely be lucrative in multiple ways. Let’s see what happens!

Big Bang has raised eyebrows by posting three movie clips and an image from Wong Kar Wai films on his Instagram account. While it may just be an innocent move, the posts have led to speculation that the Korean star may be collaborating with the acclaimed Hong Kong director in the near future. Would a G-Dragon x Wong Kar Wai project be a smart move?" />