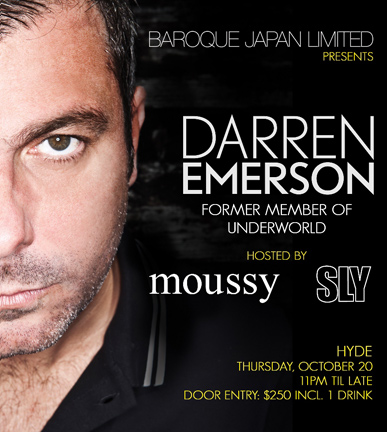 Darren Emerson, a legendary DJ and former member of the British band Underworld, will be playing at a special event by Japanese brands Moussy and SLY on Thursday, October 20th.

In addition to putting out one of the biggest hits of the 90’s – “Born Slippy,” on the soundtrack to the movie Trainspotting, Darren Emerson has also worked with The Chemical Brothers, Depeche Mode and BjÃ¶rk.

Moussy and SLY are two well known Japanese labels that have been rapidly expanding in Hong Kong and China. They are part of the Japanese “Real Clothes” movement, which embraces local, domestic designers that are both stylish and affordable.

The brands have gained widespread popularity in part due to their prominence in Japanese fashion magazines such as Vivi, CanCam, and JJ. Moussy and SLY have become influential with young women in Japan, Taiwan, Hong Kong, and most recently, urban China.

You can read more about Moussy and SLY here and here.