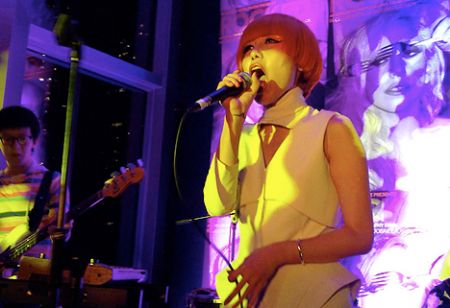 You’ve got to be good to make a name for yourself in Beijing’s cutthroat band scene, and Queen Sea Big Shark demonstrated on stage in Hong Kong last friday exactly why they’ve been successful, delivering a blistering set that rocked Woobar from the very first song to the last.

Having to battle their way through stiff competition in Beijing, Queen Sea Big Shark are seasoned performers who can teach Hong Kong bands a thing or two. Here are three things they did right:

If you’re a band, you need to think about your performance from the crowd’s perspective. Chances are, people have been waiting all night, or perhaps even all week to hear you play. Don’t begin with something mediocre, or weak! Your first song sets the tone for the rest of the set and gets people excited.

Queen Sea Big Shark had an explosive start. The video below shows the beginning of their set. It started off with ominous noise that built the mood of anticipation and then moved into a fast-paced song that got the crowd going!

It’s Friday night at the opening of a new bar, what type of songs should you play?
People want to jump up and down and get crazy, they don’t want to hear your ballads!

Likewise, you’re not playing for fans who know the words to every one of your songs, you’re playing for a new audience, so you’ve got to be able to grab their attention and keep them moving.

Queen Sea Big Shark played a set filled with uptempo, catchy songs. Most of the people in the room hadn’t heard their music before, but that didn’t stop them from immediately grooving along.

There weren’t many idle moments on stage at the W Hotel’s Woobar last Friday. The band kept things moving, and had an interesting way of bridging between songs, just pausing briefly enough for the lead singer to catch her breath.

Most people have a tiny attention span these days, and you can’t afford to let them start checking their phones or walk away.

Legendary photographer Mick Rock, who has a photo exhibit titled ROCKED, currently showing at the W Hotel, was on hand to introduce the band. He compared them to Blondie!

The traveling exhibition includes photos of all sorts of notable musicians, from David Bowie to Daft Punk!