I was walking through the Admiralty MTR station last Sunday when I noticed a large vending machine against one of the posts. Positioned in a rainbow formation beneath the glass was a colorful array of umbrellas.

Vending machines are normally associated with items such as drinks and snacks, but other, more novel uses do exist. Hong Kong Hustle previously covered the use of vending machines to sell cosmetics. We concluded that that combination of product and sales method perhaps wasn’t a great match. How about umbrellas?

Not every product is suitable for vending machines

If you think about it, umbrellas don’t require refrigeration, won’t expire, and (in this case) are a uniform size, which makes them easier to sell via machine.

Though I’m no expert, I believe that umbrellas are likely a seasonal product. Certain months it rains more than others, which means that during those months umbrella sales are at their peak. If this is the case, it would be smart to temporarily install a vending machine in the MTR for the few months that people tend to buy them.

Umbrellas are a necessity purchase driven by weather conditions. Therefore, when it comes to buying one, most people do not have the luxury of brand loyalty. Often you don’t shop around for an umbrella. There is no single store associated with umbrellas (although in Hong Kong there actually are a few stores that do specialize in umbrellas!) If it’s raining and you don’t have one, you buy one!

I should mention that umbrellas in Hong Kong are actually dual use. During hot, sunny days it’s common to see people using umbrellas to block the sun. The vending machine in fact boasts that the umbrella cuts 90% of UV rays. Perhaps this also explains why the colors may prove popular – people want an umbrella to look good with their outfit and aren’t just using them as protection from the rain.

Placing them in the MTR station is a smart idea. Not only is it a high foot traffic area, but it catches the potential consumer in the midst of their trip, offering them the opportunity to buy before they exit onto the street or on their way home.

Vending machines are best at simple transactions. In Hong Kong, their ease of use is aided by accepting the ubiquitous Octopus card. The Octopus is a payment system developed initially for transportation (trains, buses, trams, mini-buses and ferries,) that has spread throughout the city. Places that accept Octopus range from Starbucks, McDonald’s, and 7-Eleven, to Hong Kong’s parking meters. Payment by Octopus means faster transactions with no fumbling for change. The majority of Hong Kong’s residents have an Octopus card and use them on a daily basis.

According to the diagram, purchasing an umbrella from the vending machine is extremely easy. The machine outlines a two step process: first, touch your Octopus card to the designated area and next, select a color. That’s it! 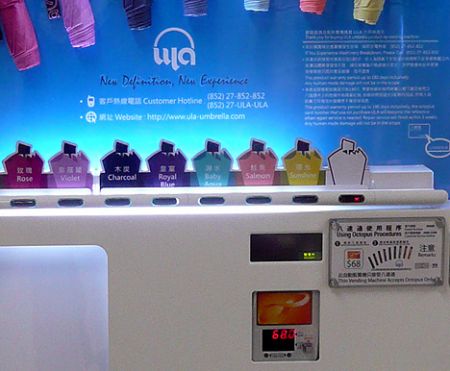 The vending machine smartly concentrates on small-sized umbrellas with a wide selection of colors. This is particularly well suited to fashion-conscious Hong Kong shoppers. The small size additionally appeals to those who would like to put their umbrellas away in a bag when not in use. (Stop to think how many times you’ve been caught lugging around an umbrella when you don’t need one.)

The umbrellas retail for $68 HKD. This is more expensive than convenience store umbrellas, which I believe retail from around $26 to $46 HKD. However, the advantage of these umbrellas is they come in basic, popular colors, (with no obtrusive logos,) and are small enough to tuck into a bag.

Hong Kong’s massive network of convenience stores, 7-Eleven and Circle K currently provide a major source of temporary or single-use umbrellas. The stores are literally all over the city, as well as in the MTR stations. However, the umbrellas they sell are not particularly high-quality, nor are they available in fashionable colors. 7-Eleven for example sells several lines: umbrellas with their logos, or more discreet, single-colored umbrellas. Both of these occasionally sell out during Hong Kong’s sometimes sudden, heavy rains.

Verdict: a well-placed vending machine offering small umbrellas in a wide range of colors fills a niche – especially during the peak of summer and the rainy season! 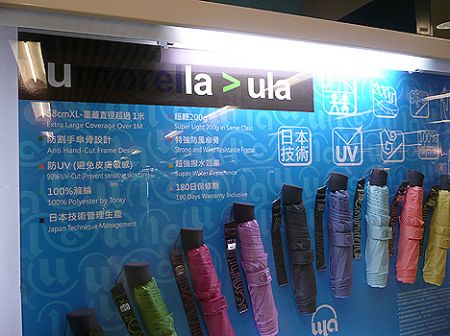