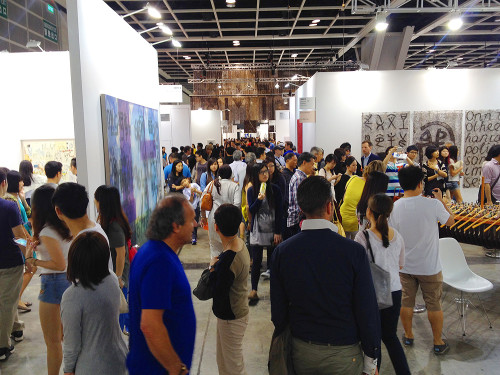 The second Art Basel Hong Kong swept into town last week, introducing the work of more than 2,000 artists and filling the city with guests from around the world. One local artist took a guerilla approach to the famous art fair, pulling a maneuver inspired by Banksy.

In a nod to the notorious British street provocateur, a local graffiti artist placed his (or her) own work on display in an unclaimed area inside the exhibition hall. A sharp-eyed friend of Hong Kong Hustle noticed the work, read the fine print, and went home with an original piece of art!

Spotting a mysterious winged letter ‘S’ hanging on a wall, our friend stopped to take a closer look. 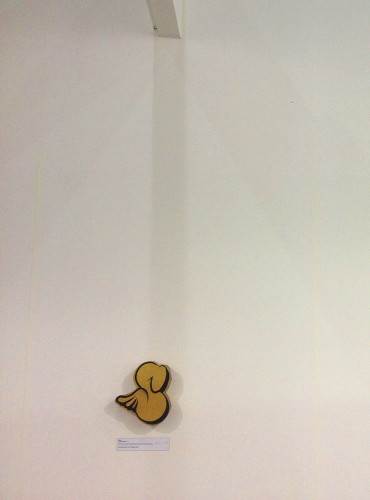 On further inspection, he noticed that the plaque read “USD Priceless / HKD Priceless / Free to take it home after show”. 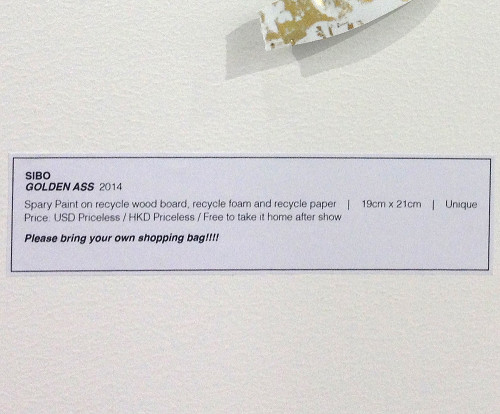 Looking around, and taking a few precautionary photos as evidence (just in case!,) he pulled the piece off of the wall and walked away, disappearing back into the crowds at the fair.

Our inquisitive friend notified us later that evening and sent us a few photos that he snapped.

Here is what was left after he removed the art – a bunch of double-sided tape used to attach it to the wall. 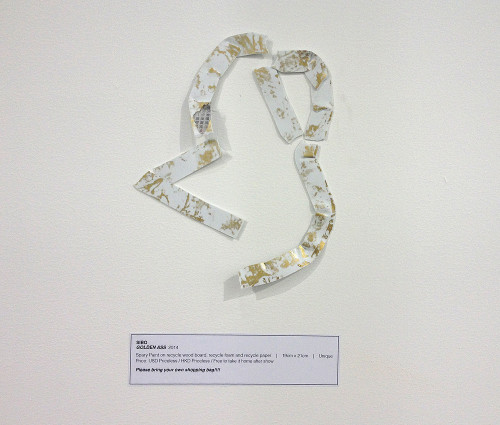 The piece titled “Golden Ass,” is made of wood and foam, spray painted gold. It’s a stylized letter ‘S’ with a wing. Does the name have any special significance? Who knows. Was it super original? Not really, but it’s still an interesting prank.

Finally, here’s the “Golden Ass” in its new home! 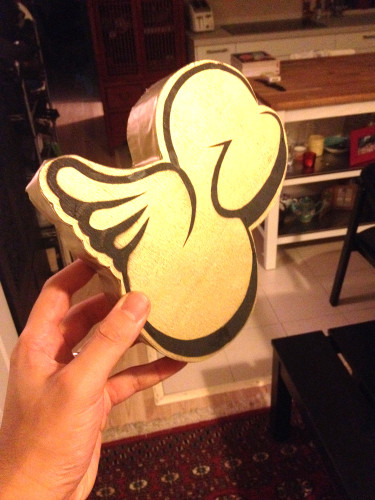 You can check out more of SIBO’s graffiti work on the HK Street Art site.

Congrats again to our friend on his new acquisition, and thanks for sharing your story with Hong Kong Hustle’s readers.

Roaming the two floors of the second Art Basel Hong Kong, we saw pieces by old favorites, as well as stumbled upon a few new artists. Here are several of our discoveries.

One immediate standout was the Edouard Malingue booth, which was filled with four works by Hangzhou artist Yuan Yuan. What caught our attention was both his subject matter and his unique style. 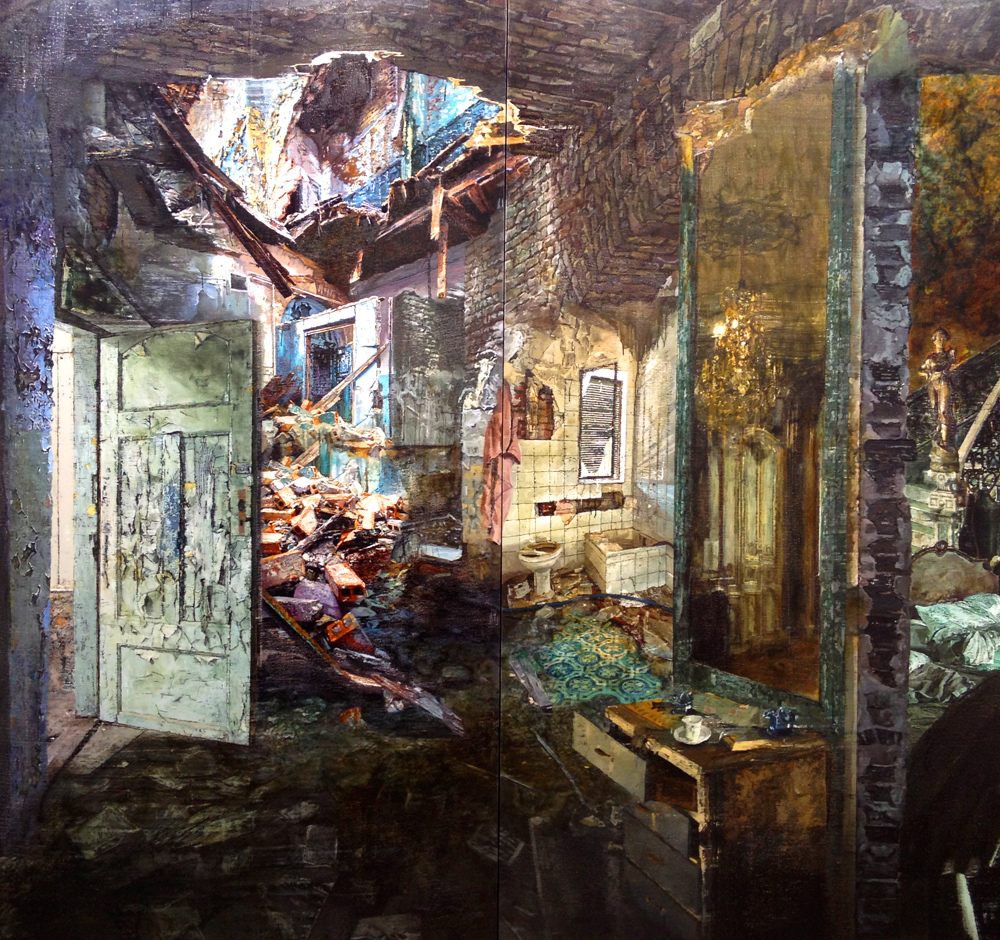 (Unlike other booths, on the day we visited, Edouard Malingue was just showing one artist. Most galleries were busy highlighting several artists in their stable, which is appropriate for a fair, but doesn’t make for a cohesive display.) 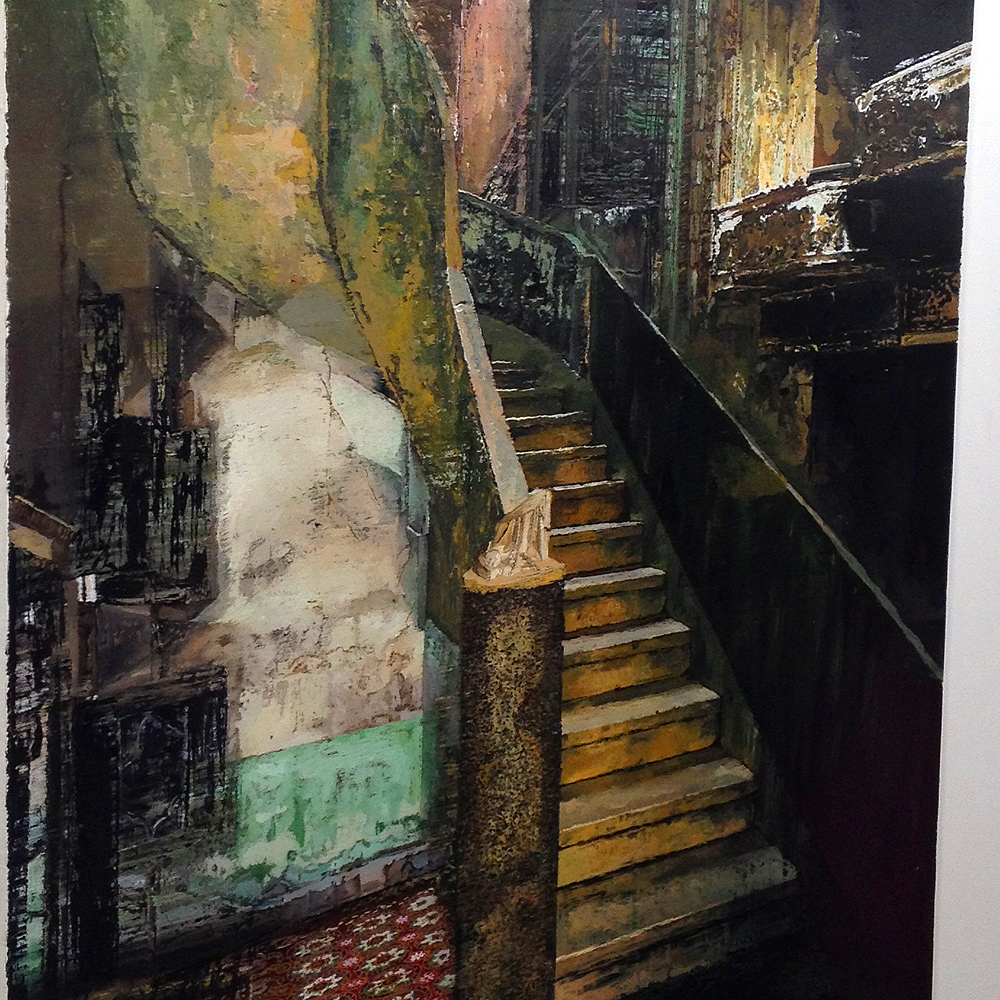 The subject of the paintings appeared to be once grand interiors now decomposing elegantly. His unique style was apparent throughout the four works, and the effect was stunning. Find out more about him on the Edouard Malingue site. It appears that his style is advancing from his earlier pieces.

Another work that caught our attention at a different booth was a large painting by Beijing based artist, Yu Hong, titled “Bed Net” from 2013.

This painting apparently came from an exhibition about melancholy, but it also seems to capture a sense of wonder.

A third interesting one-off we spotted was a painting by Korean artist Jina Park.

Jina Park’s work often contains scenes from her daily life as a painter: hanging artwork, a simple gathering with friends, or happenings at a gallery. A new show of her work will open in Seoul on the 30th.