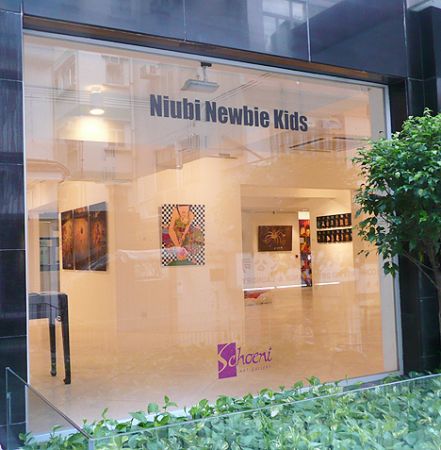 ‘Niubi Newbie Kids‘, the current exhibition at the Schoeni Gallery features work from a generation of Mainland Chinese artists born in the 1980’s. The word ‘niubi’ is common Beijinghua slang for something that is totally cool. (Literally it refers to an anatomical part of a female cow – now that’s a colorful language!)

The group show contains a variety of work by six artists. The so called ‘me generation’, the China they grew up in is very different from that of their predecessors. Walking through the exhibition I tried to spot what differentiates them from earlier artists.

One of the artists, Zhao Yi Qian, betrayed his age by including Japanese Pop culture iconography within several pieces. This is something that wouldn’t have been common in previous generations. Zhao Yi Qian also created a series of cushions or plush objects that mimicked children’s educational toys and puzzles. English-language based, they wouldn’t seem out of place at an American kindergarten. To me these give hints of a very modern upbringing, and show a way of looking at the outside world different from an earlier China.

Another artist, Feng Wei included cute, animal-like characters across different media in her pieces. I also saw this as a departure from older generations, representing a more commercial, (perhaps consumer oriented) contemporary sensibility.

Pieces by Chen Fei and Zhang Ye Xing were modern in a way that they’ve been shaped by contemporary graphic design tools such as Adobe Illustrator. Though both dealt with weighty subjects (I found the painting below by Zhang Ye Xing particularly honest and disturbing,) they have a sensibility influenced by modern tools.

[photopress:Zhang_Ye_Xing_painter_China.jpg,full,pp_image] Part of the curtain series by Zhang Ye Xing

These artists, along with Chen Ke and Zhou Jin Hua make up an interesting cross section of art from the 80’s generation. It was a good attempt by the Schoeni Gallery to feature artists in a hard to pin down category.

The next crop will be an even more diverse lot. China’s Internet generation, with the means to discover and explore the world far beyond the art school’s library, are sure to produce some remarkable work.