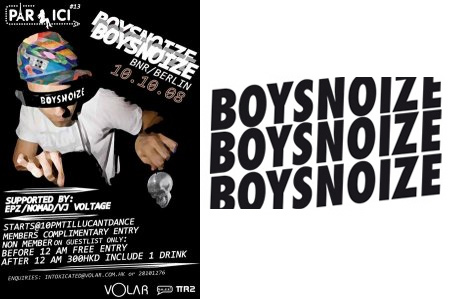 Club Volar is hosting yet another big name in contemporary dance music. Boys Noize is an accomplished d.j., producer and record label founder. In addition to his own party-rocking music, he’s remixed everyone from Depeche Mode to Bloc Party! His songs can be heard in heavy rotation played by the world’s top international d.j.s. For those in the know, this is a major treat.

As a producer, Boys Noize has received accolades from the hottest names in dance music. His label has been described as “the German Ed Banger Records” – which is no small compliment. His sound is a combination of new Electro Rock with elements of techno and other music mixed in. He’s particularly adept at remixing songs. His remix of Feist’s My Moon My Man transports the song to another level. You can hear the influence of Daft Punk.

Have a look at this promo video for his upcoming performance in Korea:

For more information and to preview some of his tracks, check out his blog or his MySpace page.

The action takes place as part of the successful Par Ici series at Volar (normally featuring French d.j.s). The details are as follows: