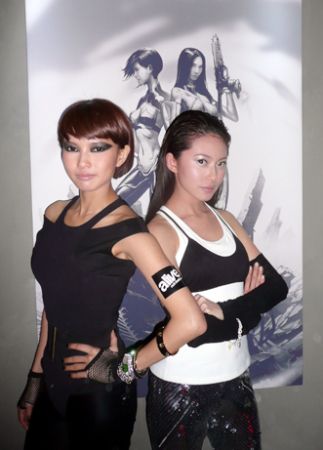 2R in character… you don’t wanna mess with Nxy and Zia!

Singer-actor duo 2R, comprised of sisters Rosanne and Race, unveiled their latest project on Thursday night. In a move that’s sure to make a lot of people jealous, the two have been transformed into Sci-Fi comic–book heroines by celebrated artist Pat Lee!

The reception and art show took place at Garage Works, a brand new gallery located in Sai Ying Pun, a neighborhood on the Western side of Hong Kong Island. The event was well attended by a mix of party-goers and celebrities.

The scene in the gallery was packed as people surveyed the work and chatted.

Upstairs there was a display case filled with toy figures.

The project is another success born from the Alive Not Dead network. The entertainers and comic book artist, who normally operate in completely different realms, were brought together through their involvement with the site. Alive Not Dead is a social network that revolves around players in the art and entertainment fields. Once becoming a member, they actively encourage creative talents of all types to work together. Alive Not Dead has formed a unique atmosphere where beneficial collaborations between artists (with previously no knowledge of each other,) are now flourishing.

The limited edition comic book is titled “Orius – Hard 2 Kill” and will be available online immediately at Orius Comics website. In addition, a second print version will hit the market in mid 2009. The series is also available as a digital download.