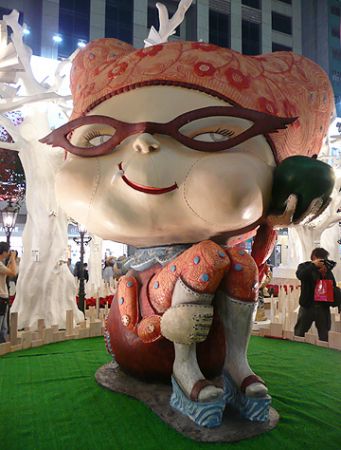 The official name of the exhibition is Indigo Child, but calling it a wonderland is no exaggeration. The mega show created by artist Carrie Chau and put up by the Times Square shopping center represents a new triumph for Hong Kong artists. There isn’t a more high profile space in the city with the same foot-traffic. The fact that it’s up during the Christmas season, situated in front of and inside of the major shopping mall makes it unbeatable in scope.

Times Square should be commended for having the foresight to recognize the artist’s talent and the confidence to realize her appeal to ordinary Hong Kong citizens. Walking by Times Square at any time of day, you’re likely to see groups of people pausing to admire the work, or more likely snapping away with their cameras. This is a major attraction and I’m happy to see it so perfectly executed by a local artist. (It was also a smart business decision for Times Square – how many thousand Facebook photos, online galleries and blog posts have images of Times Square now in the background?)

I first noticed Carrie Chau’s work in the home furnishings shop Homeless. Originally I saw it inside the Yau Ma Tei shop several years ago, and later inside the one on Gough Street near Central. Her artwork has a warm, hand-drawn, home-made, feminine quality to it that’s the opposite of the slick, clean, sterile modern characters you normally see. (Her work is more along the lines of Maurice Sendak’s classic children’s book Where the Wild Things Are, and not like the computerized characters of today.) From the look of the exhibition, she’s created an entire cosmos around her characters. Carrie’s art not only stands out, but so does her merchandising prowess.

At the Times Square atrium they set up a very sophisticated merchandising operation that nearly equals well-established brands. Scores of products are for sale, indicating that her artwork is almost a minor industry. This approach shouldn’t be scorned, perhaps it should be embraced as a way in which contemporary society appreciates art.

I think this approach is what popular artist Takashi Murakami was recently talking about. (Though I didn’t attend his recent lecture.) This is a form of art appreciation in contemporary society. Just because it is partially expressed by having consumable objects for sale, doesn’t make it any less relevant than something hanging in a gallery. This is why Murakami takes a hint from popular Japanese manga and embraces its characters and stylistics. He recognizes it as art that is relevant to modern people.

Not only are there super-sized characters and a white tree forest on the ground floor, there’s also a large show of illustrations in the atrium, a short escalator ride away. There are even thoughtful details such as the lanterns that hang above the escalators, making the entrance to her show all the more enchanting.

I’m impressed with how well done the entire exhibition is. It must have taken a huge amount of preparation and conceptual work to pull it off. I think even Hong Kong’s cynics (and Scrooges) will find something to like about it!

Worth a look and bring your camera!