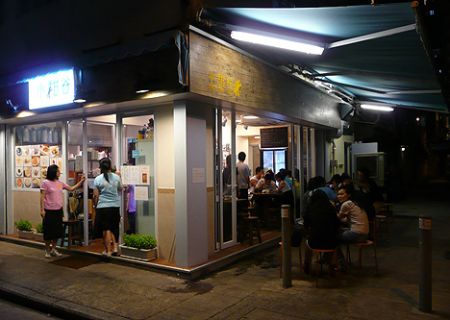 I’ve wanted to try the desserts at Xiao Tian Gu (å°ç”œè°·) for a long time, but until last weekend, I’ve never had the perfect occasion. Every time I pass by, the place is bustling with people.

Located along the back alleys of Tung Lo Wan Road, in the Tai Hang neighborhood, Xiao Tian Gu is sandwiched between Causeway Bay and Tin Hau.

Until recently, this area’s been a backwater filled with small auto repair shops and not much else. Because this neighborhood’s been left out of the massive high-rise development that’s reshaped much of the city, it has a special quiet charm.

Along narrow streets you’ll find small ground-floor shops and eateries that are impossible to open in other neighborhoods (due to the astronomical rents). It’s got a vibe like Soho had ten years ago – the places are run by individuals and have their own unique character. This year the secret seems to be out and the cheaper rents and quiet disposition may be a thing of the past. Even so, the neighborhood is still worth exploring.

I stopped by Xiao Tian Gu on a crowded Saturday night. It was already past ten and the place was totally packed. We needed to wait five minutes before two seats opened up. (During these busy hours, shared tables are a must.)

Once seated, I began to browse their menu. Curious to see if their was anything on the back, I turned it over and discovered several large looking fruit-based ice desserts. I opted for the watermelon ice.

If you want to make the other tables jealous, or make an impression on your companion, order one of these. It’s actually a six-inch tower of flavored ice with juice in the bottom of the bowl and a large straw. Mine came with a salty dried plum on top. If it’s a hot humid night, as it was when I visited, the lengthy process it took to consume it was worth the wait. For most, it’s definitely a two person job!

I liked the novelty of it, but it would taste much better if it was infused with more fresh watermelon, similar to an Italian ice.

The real standout on the menu was the cold, creamy lychee pudding. My friend and I had never experienced anything like it.

The flavor and texture complimented one another, and the wooden spoon was a great touch. Though it’s served in a plastic cup, it didn’t take away from the experience. (Serving something in a plastic cup makes it seem like it’s not fresh, and not made on the premises – which of course, detracts from the perceived value. With the lack of space, and the large turnaround, I can see why they would opt for a plastic container. Washing all those dishes would be a huge enterprise.)

My suggestion would be to try Xiao Tian Gu on a week night. You’re much less likely to run into crowds, except for now and then when the place gets featured in a magazine or on TV. Speaking of TV, Xiao Tain Gu was opened by an actress, and colorful photos of her famous friends (creatively appearing as restaurant workers,) dot the walls.