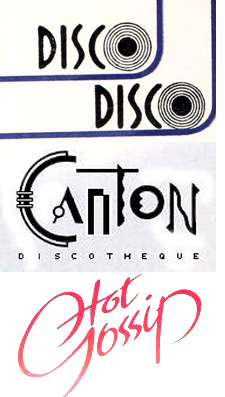 Imagine walking into a club in Hong Kong and spotting Andy Warhol, Madonna, or Sylvestor Stallone sitting there. What about going to your favorite nightspot and being able to catch Run-DMC or New Order? Back in the 80’s, Hong Kong’s discos were wild playgrounds where local personalities rubbed elbows with top international superstars.

The decade that gave birth to big hair, shoulder pads, and great music, was also a time when a new style of nightlife began to flourish.

Before venues such as DD’s, Canton Disco and Hot Gossip opened, Hong Kong nightlife revolved around hotels. In December 1978 when Gordon Huthart opened DD’s (in the present day location of Volar,) he ushered in an entirely new nightlife era.

As a stand-alone destination, DD’s was exempt from the baggage of being located inside a hotel. Instead, the disco promoted a more egalitarian clubbing experience that reflected the diverse makeup of the city.

Back in those pre-digital, pre-Facebook days, people’s lives weren’t as fully documented as they are today. Cameras used film, and mobile phones were strictly for talking. This is significant because when cameras relied on film, there wasn’t the same shoot-all-you-want mentality that digital recording enables. People used to photograph their experiences much less, which means that only a fraction survives to chronicle the creativity, panache and mischief of the era.

Fortunately, several people at the nucleus of Hong Kong’s nightlife scene in the 80’s have made their collections of photos and memorabilia available online. Among them includes hundreds of photos from nightlife luminary Andrew Bull, a legendary d.j., club owner, and record store proprietor. The best place to check out photos from the time? Facebook!

Not only do photos survive on Facebook Groups dedicated to the old clubs, DD’s (opened 1978,) Canton Disco (opened 1985,) and Hot Gossip (opened 1985), but some of the stories do as well.

Going through the galleries, people have left comments that add another piece to the puzzle. The collection of photos of DD’s, Canton Disco and Hot Gossip, offer a precious look at party people of the day, as well as local hair, makeup, and fashion trends of the 80’s.

If anyone has stories to share, or additional links, please feel free to add them in the comments.

Special bonus: check out this 80’s TV commercial with Cherrie Chung and Pele in a disco!