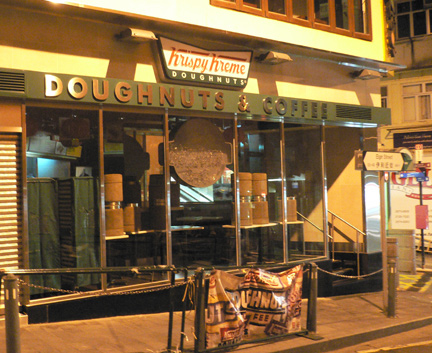 There have been two notable new arrivals from America in the last few months. Krispy Kreme, the infamously tempting doughnut shop, and Burger King have both opened new branches in the city.

Krispy Kreme has two locations – one in Causeway Bay, a high-traffic shopping mecca, and the other (pictured above) in Soho, the trendy neighborhood home to dozens of restaurants offering international cusine in a two-block area.

It’s interesting that Krispy Kreme is occupying the former site of Starbucks Coffee, which itself had an extremely successful launch in Hong Kong a few years ago. The Soho branch is directly next to the Mid-Levels escalator (search my archives for previous entry) which moves over 45,000 people per day! It’s a high-profile location and an excellent choice for making an introduction.

On the subject of American chains arriving in Hong Kong, it’s worth noting that before Starbucks opened people questioned their ability to do well since, the argument went, there was a cultural tie to drinking tea rather than coffee in H.K. The skeptics were proven wrong. Starbucks has been a runaway success, and has expanded greatly. The same naysayers have said that American-style doughnuts are too sweet for Hong Kong – let’s see what happens! 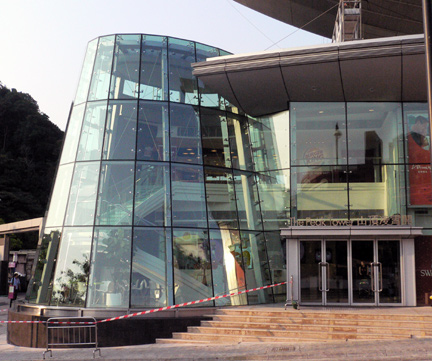 Burger King has adopted a different location strategy. Despite being located at the top of Victoria Peak in the newly renovated Peak Tower (a main tourist destination overlooking the city,) Burger King has attracted residents from all over the island. On a recent Sunday, the place was completely packed with more locals than tourists – with not a single seat available!

Fast food pioneer McDonald’s is extremely successful in Hong Kong and they are ubiquitous throughout the territory. Until recently however, Burger King had only a single branch open in Hong Kong – located inside the terminal of the airport, which limited its customers to only ticketed passengers who had proceeded through immigration. Opening a location on The Peak is perfect to build the brand with the massive number of tourists from China and other parts of Asia as well as to provide familiar, inexpensive food for Western foreigners. 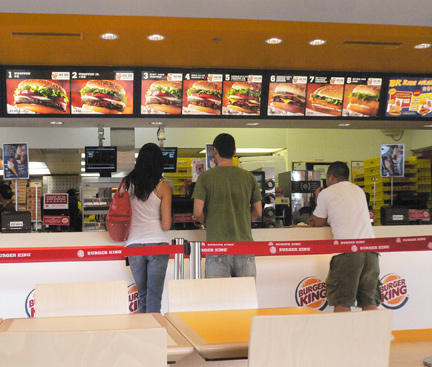