Last Thursday night I received a text message from one of Hong Kong’s top clubs, Volar, informing me that Jaochim Garraud would be performing a special d.j. and v.j. set that night. Dragon-i and Volar both send out text messages to inform their regulars of upcoming events. It’s effective, and almost necessary, since there’s been such a flood of talented d.j.s passing through town recently.

When I arrived at Volar, most of my friends were already there, dancing at the front of the stage. Though it wasn’t packed, those in attendance were dancing like crazy! After thirty minutes in the club I could see why. Joachim Garraud was truely a performer. Rather than simply using records, or just a computer, and standing around in between songs, this guy was taking things to another level. Using a computer for visuals, an effects box to make sounds, a keyboard slung around his body like a guitar, in addition to standard d.j. equipment, Joachim Garraud was a blur of constant motion. 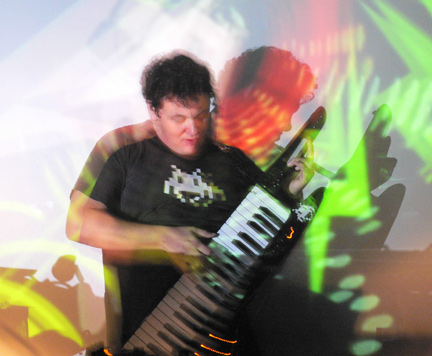 Not only was he a performer, but his choice of music was built around being interactive with the crowd. His technique for combining pre-recorded songs with live music raised the level of excitement in the club exponentially. When he wasn’t playing the keys he was tapping out some digital effects. His set was masterful at bringing the audience to a crescendo with each song that he played. It was an excellent performance. 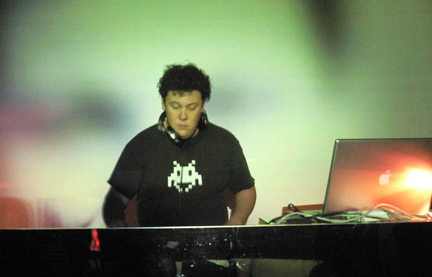 Tags from the story
dragon i, joachim garraud, nightlife, Volar