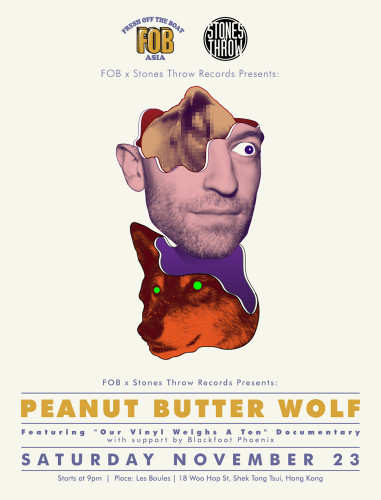 Producer, DJ, and Stones Throw record label founder, Peanut Butter Wolf will be in Hong Kong on Saturday, November 23rd to showcase his documentary “Our Vinyl Weighs A Ton.” Sparked in part by the sudden death of his best friend and music partner, Peanut Butter Wolf went on to found the influential Stones Throw imprint. The film will coincide with a special video DJ set by the accomplished label boss.

A major fixture on California’s underground Hip Hop scene since the early 90’s, Peanut Butter Wolf’s resume reads like a Who’s Who of West Coast Hip Hop, putting out music on Hollywood Basic and Southpaw Records, before founding his own label, Stones Throw in 1996.

In his capacity as a label owner, he has overseen major releases by the legendary Madlib including the Jaylib collaboration with Jay Dilla. Since its inception, Stones Throw has displayed a commitment to releasing high-quality music, whether it be Hip Hop, Soul, or more experimental sounds.

The story behind the inspiration for Stones Throw is a dark one. The documentary “Our Vinyl Weighs A Ton” explores how tragedy gave birth to a creative powerhouse.

The event is brought to you by Peanut Butter Wolf, F.O.B., and Stones Throw Records.

Doors open at 9pm. The documentary screening will begin at 9:30 *sharp* and will be followed by Peanut Butter Wolf’s set. Don’t be late!

Limited tickets are available for this event.

Advance tickets are $250 HKD. Limited tickets will be sold at the door