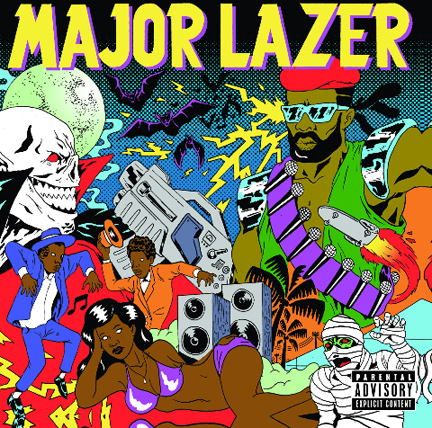 This is the group behind ‘Pon De Floor,’ a wildly popular dance track that erupts in multiple crescendos, driving dancefloors berserk.

But who exactly is Major Lazer?

Major Lazer is actually a super-group composed of two influential dance music producers, Diplo and Switch. Though you might not be familiar with their names, the two have shaped contemporary music enormously, influencing everyone from M.I.A. to the Black Eyed Peas.

[photopress:Major_Lazer_Hong_Kong_Volar_HK.jpg,full,pp_image] Here’s Diplo throwing down with Steve Aoki looking on.

Diplo and Switch decided to collaborate around a theme and created a fictional character named Major Lazer, a Jamaican commando who battles the undead. The album, titled “Guns Don’t Kill People… Lazers Do,” was influenced by dancehall music, an offshoot of Jamaican Reggae. Although the songs were recorded in Jamaica and feature vocals from big names in contemporary dancehall music, the album itself is a fantastic cultural jumble of different influences.

The appeal of Major Lazer’s sound is widespread. Boy George even played ‘Pon De Floor’ at prime time during his recent gig in Hong Kong (the crowd went crazy).

Also part of the Major Lazer show on Thursday is Skerrit Bwoy. Easy to spot with his yellow Mohawk, the Bronx-based dancehall selector and personality is sort of a Flavor-Flav style hype-man for the group.

Among his other talents, Skerrit Bwoy is a master at ‘daggering’, a creative, comical, over-the-top performance of simulated sex. Hong Kong, this is going to be one interesting night!

For a taste of Major Lazer’s sound and a good definition of daggering, have a look at the video for ‘Pon De Floor’.

Check out Diplo and Skerrit Bwoy performing live at a BestBuy store below (I don’t think they will be invited back again.)