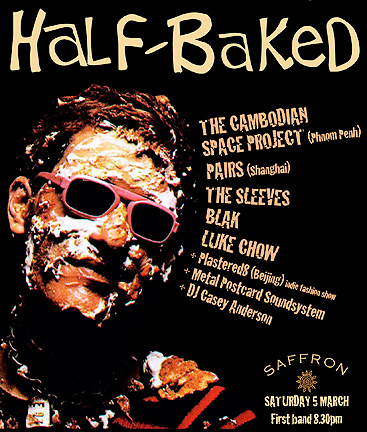 Half-Baked is an ambitious concert featuring bands from Phnom Penh, Shanghai, and Hong Kong, performing up on The Peak! Let’s see, live music, plus new bands, plus a new venue? This looks great!

What kind of music is it? I’d go just for the headliner alone! According to the promoter, The Cambodian Space Project are influenced by “Cambodiaâ€™s pre-war psychedelic garage scene of the late sixties and early seventies.”

There will be five acts performing in total, including The Cambodian Space Project, Pairs, The Sleeves, Blak, and Luke Chow.

Tickets are a reasonable $100 HKD in advance, or $125 at the door. (Also includes a bottle of Beerlao, and a CD). Tired of the same old scene and spots? This might be a fun change.

For you beer lovers, the organizer notes that “bottles of Beerlao are $40 HKD all night, while stocks last.”

The show starts promptly at 8:30 pm. It’s in a rather secluded part of The Peak, about a five minute walk from the Peak tram, so hopefully the gig won’t get hassled.

5 minutes walk from The Peak Tram terminus and shopping mall

The show starts promptly at 8:30pm!