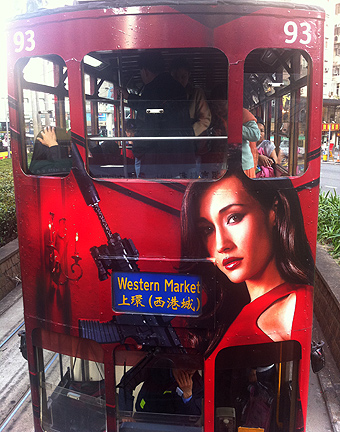 Actress Maggie Q. was once a familiar face around Hong Kong as one of the city’s top models. After dipping her toe in the film biz in Hong Kong, she left us for Hollywood to join the cast of several high-profile films such as the Mission Impossible, Die Hard, and Rush Hour franchises.

Her latest project is the starring role in the American prime-time TV series titled Nikita, where she plays a rogue assassin.

It appears that Warner TV, which is coming to Hong Kong, is headlining Nikita as part of their upcoming line-up.

The former model has been showing up all over the city again, this time on billboards and trams as Nikita!

Walking around Central, there was even a massive advertisement on the side of the Pedder Building.

We hope she comes back for a visit soon! 😉