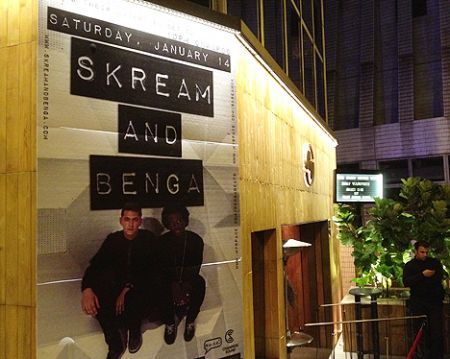 As Dubstep continues to gain traction on international dancefloors (and even begins to influence Pop music,) Skream and Benga, two pioneers who helped shape the genre, will be playing at FLY on Saturday, January 14th.

Only in their mid-twenties, both Skream and Benga have been active producer / artist / DJs, for over ten years. Skream is particularly in demand as a remixer, and his touch can be heard on numerous indie and underground dance hits.

The duo have put out a large body of music, both collaborating with each other and on their own.

Here’s Skream’s remix of Cassius – I Love You So. (It’s got a certain 90’s ‘Bizarre Inc. – Playing with Knives’ quality to it!)

Preferring the term U.K. Bass, rather than Dubstep, Skream and Benga are guaranteed to provide an education in the genre on Saturday night. For this style of music there aren’t two more influential djs you could hope to hear.