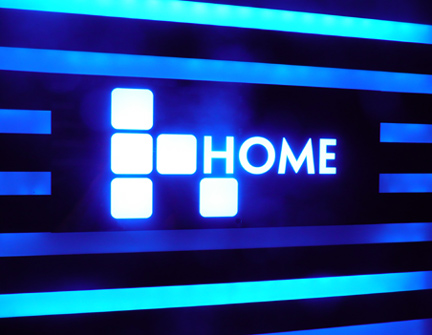 Late night / early morning nightlife institution Home Base recently relocated to a basement just a few doors down from its previous location. The long running club occupied a niche as a sort of last stop for a night out in Central.

After making the rounds in the neighborhood, it was the only place still open when major clubs such as Volar, Dragon-i and Drop closed for the night. Prime time at Home Base would typically be after 5 am and continue well past dawn. From the inside you couldn’t determine what time of night it was. The dark atmosphere and comfortable lounge seating made it easy to lose track of time – or simply pass out!

Though not one of the more trendy places, it did a consistent business and lasted for around seven years – making it one of the oldest spots in the neighborhood.

The new space is easy to find due to the bright blue lights decorating the sidewalk level entrance.

For those unfamiliar with the old Home Base, it’s a few doors down from the escalator on Hollywood Road, just opposite the decommissioned police station. (I can still remember some early parties at Home Base where the police turned up and asked for the music to be lowered!)

Entering the new Home Base, patrons walk down a flight of stairs and pass through a set of heavy curtains. At first glance the space is a mix between the old club combined with elements of Drop and Dragon-i. One major improvement over the original is better air circulation! The old spot was notoriously smoky, to the point where your eyes would sting.

A second change I’ve noticed is that the club is beginning to attract party-goers much earlier than before. With bouncers standing out front, passersby on the narrow stretch of Hollywood Road will be much more likely to have their interest piqued. Previously, a trip to Home Base meant taking an elevator up through a nondescript entranceway.

The entrance to the old Home Base

Though I haven’t been to the new Home Base yet during prime time, it appears to be maintaining its role in Central’s nightlife panorama.