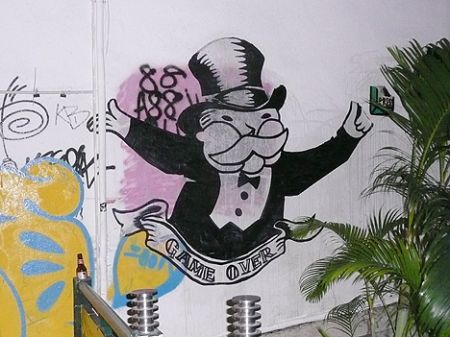 As the turmoil in the financial markets began to spread to Hong Kong, someone put up a large wheat-paste graphic with the message “Game Over” on Pottinger Street (the old stone steps between Wellington Street and Hollywood Road) in Central. The image features the logo from the board-game Monopoly (a man in tuxedo and top hat,) with the words ‘Game Over’ below it. The rather wry graffiti attempts to announce the end of an era, but walking around this weekend, the city’s bars and clubs appeared to be bustling. In fact, the crowds spilling out onto Wyndham Street over the last few nights were much deeper than usual.

This isn’t the first time the city’s nightlife has been threatened.

During the Asian financial crisis in 1997; the dot-com bust in 2001 (anyone remember JAH or BLUSH?;) and most recently in late 2003, during the S.A.R.S. outbreak, the city’s party scene has taken a hit. Like Hong Kong’s property market, nightlife in this town appears to be cyclical.

Talking over the last week with local club owners, the general opinion seems to be that people spend more during a downturn, if only to drown their anxiety.

Certain clubs may fare better than others. For the last year there have been many new additions to the nightlife, with few being able to carry anything but weekend traffic. Considering that rents have been high for the last few years, if people do stop spending, you can expect these clubs to change hands, or become a different type of business.

Facing S.A.R.S., during the last downturn, Dragon-i, then a new club, tried to do something to bring people out of hiding and back into the night. They held an “I Love H.K.” party which helped to raise people’s mood and get them to return to the clubs during the nadir of the epidemic. (I still have my T-shirt that guests were given to wear for the night!)

It’s too early to tell how much the recent tumult will effect partying in Hong Kong. Slashed promotional budgets could potentially slow the lavish events that have become a regular part of the city’s nightlife. Perhaps this will lead to smaller, more exclusive events, a recipe that would only further stoke Hong Kong’s obsession with status!

Stay tuned for an update!