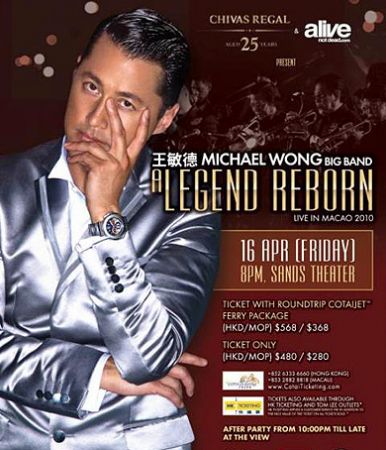 Frank Sinatra, Sammy Davis Jr., Dean Martin… Michael Wong? If you’ve been longing for a Rat-Pack inspired evening in Macau, this may be your best chance!

Friday, April 16th, Michael Wong will be performing live with a seventeen-piece big band at the Sands Theater in Macau. In addition to announced duets with singers Race Wong (2R), and Marsha Yuan, you can expect a number of special celebrity guests to take the stage over the course of the evening.

In true Vegas form, there will be a string of dancers and other performers adding to the spectacle of the show.

A Legend Reborn
This isn’t the first time that Michael Wong has helmed a band of this size. In 2007, he lead a series of concerts with a big band as well. You can watch a video of him rehearsing for that performance here.

Based on the previous show, I’d say Michael will be singing renditions of popular songs and big-band classics. The vast majority, if not all of the songs, will be in English.

Though most people think of Michael Wong as an actor, (and one who personifies the stereotypical ‘A.B.C.’ with a cocky attitude and broken Cantonese,) he’s put out several CDs and has a real passion for music.

Check out his recent rehearsal with Race Wong and a brief interview:

Michael Wong has not left the building… there’s more!

In addition to the concert, there will be a special after-party to celebrate Michael Wong’s birthday!

The after-party will take place at The View on the 24th floor of The Sands casino and features several d.j.s as well as the Glamour Girls and Sands Angels dancers! If that’s not enough, the Alive Not Dead gang will be in strong attendance and you know how they party! Expect a celebrity-filled event with Michael Wong presiding.

There are several packages available that include ferry tickets for an additional $88 MOP.