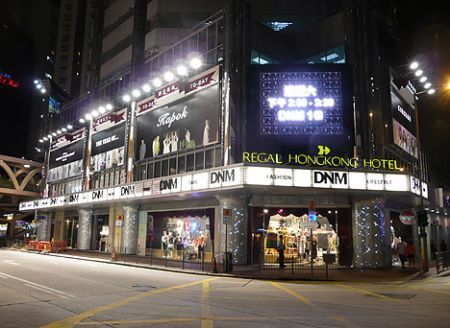 Commissioning local artists to create displays, and featuring exclusive brands found only under their roof, the mall was an ambitious undertaking. Fast forward to today, Delay No Mall is closed, the large space being subdivided and re-purposed. What happened?

According to their website, Delay No Mall isn’t finished, it’s just getting a remix. The notice currently states “The MALL is looking at an exciting change of CONCEPT to FOOD and BEVERAGE.”

Delay No Mall opened with a bang. In the early days they hosted several interesting events including the 24 Herbs CD launch and the Eric Haze show. Compared to say, the Causeway Bay LCX, which opened around the same time, it clearly had a style and direction.

Created by the founders of the G.O.D. lifestyle stores, Delay No Mall tapped local artists and came up with creative videos announcing their launch. The shopping center itself featured interesting touches such as a wrap-around cinema-style marquee, and even Pac Man tiled bathrooms!

Oh, what a difference a block makes

The Achilles heel of Delay No Mall is its location. Though just a short walk in either direction from main arteries of Causeway Bay, the place is simply awkward to get to. Both by foot and by taxi it’s not an easy approach. Thanks to the lack of a normal crosswalk, except on one side, and overzealous sidewalk fencing, the journey by foot means climbing up an elevated walkway, or a circuitous route that takes you past the building first. Arriving from the other direction is slightly better, but certainly less traveled.

Stopping by recently, there were a few sad remnants of the art that was initially commissioned. The shops are all gone and it appears to be in the early stages of redevelopment.

From the beginning, Hong Kong Hustle speculated that the mall would need to become a destination in order to work. This is a necessity because it’s out of the routine paths that shoppers follow in Causeway Bay.

By giving the space a unique personality, the operators certainly tried. Achieving the right balance of shopping, restaurants, lifestyle and entertainment attractions isn’t an easy feat. Causeway Bay is one of the top shopping neighborhoods in the world, and finding niches not already filled is difficult.

The theory behind adding entertainment and restaurants to a mall is that they draw a consistent flow of people through the doors, and thus help attract customers to the shops. This standard formula certainly works for other shopping centers in the city.

Though Delay No Mall, dabbled in adding restaurants and entertainment spaces, it did so rather late in the game and the effect didn’t seem cohesive. In fact, Delay No Mall opened piecemeal, in stages. The pressure to open as soon as possible – perhaps due to high rents, or to catch the Christmas season – possibly forced this decision. The end result is that the place never felt quite finished.

Will the new reformatting of the space do the trick? I wouldn’t count these guys out just yet!