American basics retailer, The Gap will be opening their first store in Hong Kong in November. Just around the corner, Abercrombie & Fitch are taking over Shanghai Tang’s space in the Pedder Building, paying $7 million a month in rent. The Queens Road Central area is fast becoming crowded with large, mid-priced retailers.

Despite its high foot-traffic location (on the former site of Queens Theatre,) The Gap may face a more difficult time attracting attention. As a provider of everyday casual wear, the brand faces competition from a medley of labels already entrenched in the neighborhood and throughout the city.

Though its prime location (next to a busy subway station) guarantees exposure, The Gap faces a long list of potential competitors, both on low-end and medium priced items. Stores such as Uniqlo, Cotton On, Giordano, H&M, Esprit, and Muji, are a few that can compete on various products and price points. 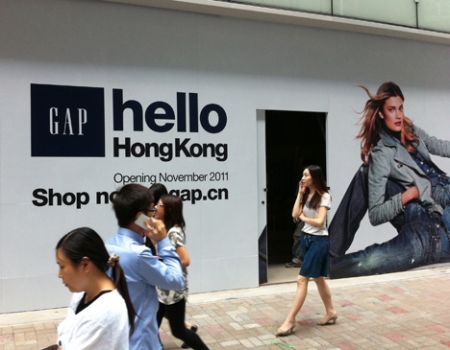 Unlike the high visibility of Abercrombie & Fitch’s logo emblazoned apparel, or H&M’s frequent collaborations with fashion luminaries, The Gap doesn’t immediately carry the same amount of buzz or notoriety.

Early on, The Gap needs to define itself to the local consumer. What is The Gap’s image and who wears their clothing?

Perhaps one way of gaining visibility is through celebrity placement. New services such as Alive.cn, help brands get associated with the right celebrities, sparking grass roots awareness of their labels via social networks.

Beyond image, there are practical localization issues such as sizing. Will the shirts be standard American sizes, or will they be more tapered? This is how American Apparel initially won lots of fans – the shirts fit slimmer builds better and were more flattering than the boxy American basics at the time.

Despite the hurdles, there is still ample opportunity to make a positive debut. Hong Kong inherently favors new and foreign things, so with the right moves, The Gap has a chance at making a strong initial impression. 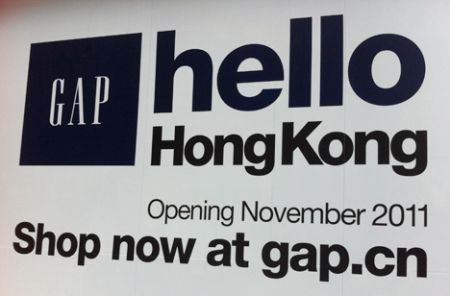