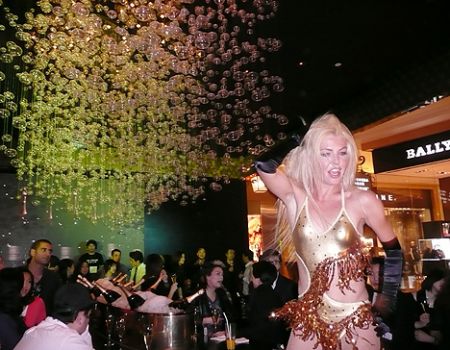 Friday night for the first time I took the new ferry directly to the Cotai strip in Macau. This recently developed area is home to several new attractions, the most prominent being the massive Venetian complex.

Arriving at night, the new route lacks the dramatic view of the older Jetfoil, but it’s a more direct option if you’re headed to Taipa. My destination for the night was the Moet Bar which recently opened in the brand new DFS Galleria Macau, part of The Shoppes at the Four Seasons. The sprawling network of buildings is actually all connected to the Venetian.

To make things clear, the Moet Bar isn’t meant to be a nightspot. In fact, its operating hours end at midnight.

Instead it’s actually a temporary flagship space built to support the champagne brand by having consumers equate Moet with luxury. It accomplishes this in several ways. First is by its premium location. The Moet bar is located in Macau’s newest upscale shopping center. Secondly, the bar is situated smack in between high-traffic upscale brands Dior and Louis Vuitton. Even if shoppers don’t stop in for a drink, they will recognize that Moet is on par with the other symbols of luxury surrounding it.

The Moet bar is also a success design-wise. It attempts (with good results) to translate the essence of champagne into a physical manifestation. There are hanging mobiles that give the feeling of floating bubbles and other touches that transform the space.

In between two champagne bars are a set of golden petals that create a more cozy atmosphere.

My main criticism of the Moet Bar as an event space is that it doesn’t mask the fact that it’s located directly in the midst of a shopping mall. For the event on Friday night, shoppers ambled by, curiously looking over as the function took place. In the future I would suggest creating temporary, removable walls using draped fabric to enclose either side of the long back bar. Without this, there isn’t a sense of privacy or intimacy that is usually found at exclusive events. Perhaps this is where the “golden bubble” that makes up the center of the space comes in. Here between the gold petals you have several tables to sip champagne in a little more private setting.

On the night that I visited, Moet was launching a new service that allows customers to customize bottles of champagne with Swarovski crystals. For a small fee you can have the crystals spell out names, dates, or monograms.

A second interesting thing I spotted during the night were golden bottles of Moet.

[photopress:Moet_gold_bottle_Macau.jpg,full,pp_image] Note the bottle being poured in the photo

The bottles were very effective at attracting attention and guests repeatedly posed for photos with them.

As a temporary flagship (it will close in January 2009,) the Moet bar’s role isn’t necessarily to make money, but to build a strong impression of the brand. At this task it handily succeeds.

A tangent on Macau nightlife
I tend to have a negative view on upscale nightlife in Macau. Not long ago there was a rush to create cool clubs catering to the influx of gamblers, but realistically, there isn’t the type of crowd that can support a sophisticated venue. In Macau, as in Las Vegas, the place is really about gambling and everything else takes a back seat. For all their know-how at running casinos, I haven’t been impressed by the casino’s ability to open a nightspot. The briefly opened Tryst attached to the Wynn’s hotel and casino is a case in point. Despite all the bells and whistles they brought out on opening night, the place just didn’t look cool or have a good crowd apart from a few tables from Hong Kong. After a few months, the space was quickly re-purposed into private gaming rooms.

The majority of gamblers in Macau arrive from Mainland China. They don’t have the appetite for a high-end nightclub. They are more inclined to spend their money gambling and perhaps go to a karaoke or sauna.

Shopping in Macau
Shopping in Macau used to be a fairly dull affair. For luxury purchases and trendy brands most people would just come to Hong Kong. As Macau has been developed over the last few years though, there has been a huge influx of brands that nearly make the trip to Hong Kong irrelevant. (This transformation may be complete once Lane Crawford Macau opens!) UPDATE: Lane Crawford is no longer planning a branch in Macau.

I didn’t have much of a chance to look over the DFS mall itself. Just making my way to and from the venue, the place did have a significant grouping of luxury brands under one roof. Though smaller, the selections seemed somewhat comparable to Hong Kong’s Elements or IFC shopping malls when it comes to luxury offerings.

The big question now is – can Macau support all of the new shops that have opened over the last three years?