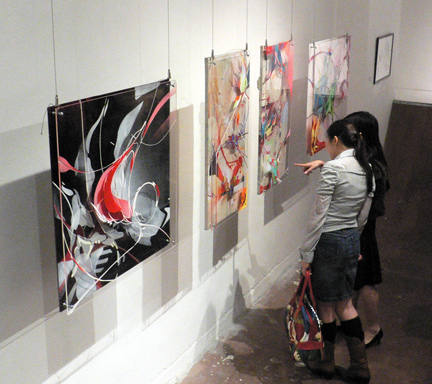 Last Thursday I spent the day walking around Macau. After arriving back in Hong Kong via the Turbo Jet, (which takes an hour from Macau to Central,) I had to run to the opposite end of Hong Kong to check out an art opening. I took the MTR, Hong Kong’s subway to Chai Wan, the last stop on the Hong Kong Island line. Disembarking, I walked to the former industrial space that houses the Six Keyz gallery. On my way, I walked through Chai Wan Park, which wouldn’t qualify as a park in other countries since nearly its entire surface is covered in cement!

The exhibition titled “Inner Vision” consisted of works by Stephen Holding and Marion Bolognesi. Stephen’s abstract, layered constructions worked well as a counter to Marion’s minimalist paintings of facial features. The two each had a wall primarily of their individual works, in addition to a third wall of their collaborations.

The laid-back atmosphere of the gallery built around an indoor skateboard half-pipe suited the young crowd who seemed interested in seeing something new and enjoying the show.

For a look at the artwork and the vibe…

Before I left, I stopped next door to have another look at the Chancery Lane Gallery’s annex, since it’s located on the same floor. Simon Birch’s work was still hanging. The work below titled “Best Painting Ever” is a real standout!