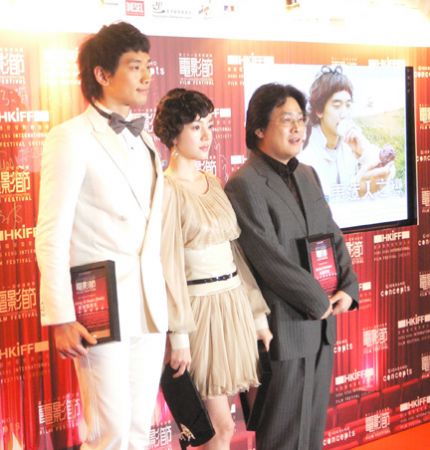 “Eye In the Sky” played first on the bill. Pictured above at the opening ceremony were Lam Suet, Maggie Siu, Kate Tsui, Simon Yam, director Yau Nai-Hoi, as well as Milkyway Films founder Johnnie To.

Though the first film garnered an army of press, it paled in comparison to the big turnout for “I’m a Cyborg, but that’s O.K.” The main target was pan-Asian, South Korean pop sensation Rain, who was the male lead in the picture (his first foray into acting.) Heavy security was needed to keep Rain’s fans at bay. Later in the sold-out auditorium there was an audible swoon every time he had a tender moment on screen. His fans greeted him with lighted placards and donned masks – a trademark of his character in the film. Have a look at all the action, including videos of Rain, Park Chan Wook and actress Lim Su Jeong at the opening ceremony!

Actress Kate Tsui poses for photographers at the opening ceremony of the festival.

Simon Yam together with Maggie Siu and Kate Tsui.

The producer, director and cast of “Eye In The Sky” on stage.

Director Park Chan Wook, Lim Su Jeong and Rain on stage before the screening of “I’m A Cyborg and That’s O.K.”

The auditorium packed with fans, cameras aimed at the stage.