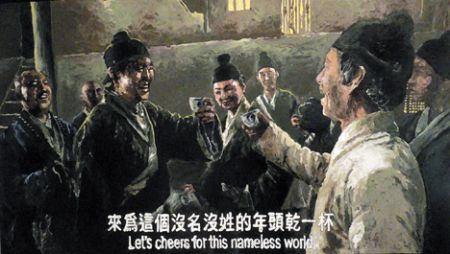 Last week I headed over to Tsim Sha Tsui to check out an exhibition at the Hong Kong Museum of Art. Titled “Made In Hong Kong,” the show featured the work of seven local artists. Recently, things have been heating up in the city’s art world with a surge of interest due to the success of Mainland Chinese art as an investment vehicle. Christie’s held a record-breaking auction in Hong Kong last month and new galleries have been popping up around Central in high foot traffic, high rent locations, confirming the boom. It’s under these conditions that I was prepared for a bold show at the museum. How did the “Made In Hong Kong” art exhibit stack up?

For those of you who have never been, the Hong Kong Museum of Art is adjacent to the Cultural Centre which is next to the Star Ferry terminal in Tsim Sha Tsui. It’s a drab brick building directly on the waterfront promenade. The museum houses a collection of classic Chinese antiquities such as ceramics from different dynasties in edition to special exhibitions. The entrance fee is a mere $10 Hong Kong dollars, which is around $1.50 USD. It’s free on Wednesdays.

When I first learned of the exhibition, the title “Made In Hong Kong,” struck me as somewhat of a clichÃ©. Film fans will know “Made In Hong Kong” as the title of the movie that thrust director Fruit Chan onto the art-house scene in 1998 and launched the career of actor Sam Lee. It’s been used countless times since then, and coming up with a more imaginative title should have been a priority.

At a time when public interest in art is at a peak it would have been an ideal moment to put on an ambitious show. Instead, “Made In Hong Kong” was uneven, uninspired and disappointing.

The show featured a range of work, from photography, to painting, sculpture and installation art. The photographs, which were portraits of the elderly in dilapidated, cramped housing, I had seen somewhere else before and liked them. Showcasing these photos along with a contemporary show seemed like a bad fit. Much of the other work on display could be described as amateurish, middle of the road, or second rate.

A slightly more interesting set of paintings captured scenes from Hong Kong films, along with their subtitles.

Painted on a large scale, they dealt with themes of Hong Kong’s identity. In another room there was a series of paintings used to recreate a scene in the film Infernal Affairs. Though I liked these, it would have been interesting to see the artist take things one step further and add some sort of twist instead of copy them verbatim.

There was a pamphlet accompanying the exhibition that featured trite interviews and bizarre photo shoots with the artists included in the show. Why do we need to see that? It’s almost as if the curators themselves don’t know what art is. They included a rambling attempt at explaining art in the beginning of the booklet. How about putting together an interesting collection of work and letting it speak for itself? It degraded the show even further to take this angle.

Once again, in fitting with Hong Kong’s image as a capitalist city, the best and brightest are being brought to the public by the private sector.

Last year in particular was an exciting year for art in Hong Kong with Agnes B. and Diesel putting on numerous fine exhibitions. Nike has also been a big sponsor of local art both with commissioning Michael Lau and also opening their 26 Degrees gallery. Numerous events over the last year such as the K-Swiss K-Spray parties have brought acclaimed international street artists to town. As I have noted before, fashion brands are often the new patrons of the arts.

Even small potatoes such as the Six Keyz gallery (R.I.P) made a difference, putting on shows that attracted interest and exposed people to new painters and ideas. In addition, Galleri magazine, even after only two issues, has changed the face of the local art scene by creating awareness, recognition and networking for local talent.

It’s a shame that at such an opportune time a major institution would fumble the ball with a less than inspiring show.

Interesting note:
The painting at the top of this post features a scene from Dragon Gate Inn, the Tsui Hark remake from 1992 with Brigitte Lin. One of my favorites is the original Dragon Inn from 1967. The director King Hu got the idea to make a spy movie from the success of the early James Bond films. Instead of setting it in contemporary times, he created a period piece spy film – brilliant! The whole genre set off by “Crouching Tiger, Hidden Dragon” owes a debt to this film (and other King Hu works). Catch it if you can!