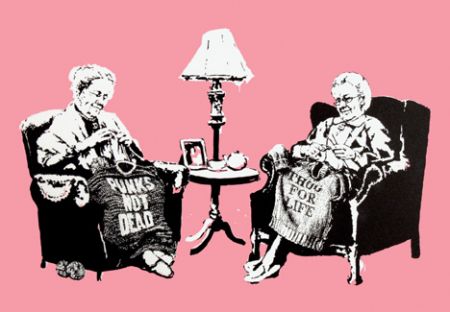 The works of Banksy, the notorious British artist-activist-prankster will be making their way to Hong Kong (their Asia debut) at the end of the month. The destination is “Love Art 08” an ambitious exhibition at the Hong Kong Art Centre. The show also boasts contemporary pieces by Robert Indiana, Damien Hurst, Romero Britto, Mel Ramos and Keith Haring.

Not only is the mysterious Banksy a talented painter, his antics over the years – part social critique and part marketing genius – have inspired legends.

Banksy’s work evolved from a background in street art. Over his career he developed a unique eye for gauging his surroundings and creating work that fits a location in a special way, often amplifying his message.

Though he regularly paints with stencils to execute his street pieces quickly, he has also created canvases, sculptures and installations.

Some of his more infamous works include:

– fake British Â£10 notes with his own modifications including an image of Princess Diana replacing the Queen.

– substituting CDs of Paris Hilton’s album with CDs of his own which included Banksy images and featured Danger Mouse remixes of the tracks. He then added them to the shelves of music stores throughout England!

– painted “We’re bored of fish” in the penguin habitat of the London Zoo.

– hung his own remixes of classic paintings in blue-chip museums around the world. His targets have included the Museum of Modern Art, the Metropolitan Museum of Art, the Brooklyn Museum, and the American Museum of Natural History in New York; the Louvre in Paris, and London’s Tate Britain gallery.

Now on the radar of auction houses, his works have been fetching record highs over the last few years and have attracted celebrity collectors.

The “Love Art” exhibition takes place at the Hong Kong Art Centre in Wanchai. It runs from April 23rd to the 28th (note this is a short exhibition – catch it while you can!) The show is being put on in collaboration with the Helium Foundation in London, and the Fabrik Gallery here in Hong Kong.

The opening event, “Banksy Robs Hong Kong” takes place at The Arts Centre on April 23rd from 6:30-8:30 pm. This is a major contemporary art exhibition. Don’t miss out!

To view more images of his work, check out Banksy’s website.