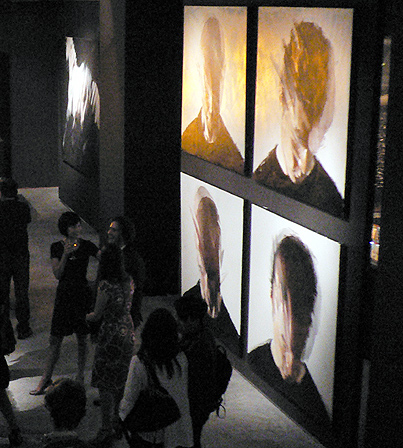 As the city’s art community flocked to his show “This Brutal House” last April, the painter Simon Birch had other things on his mind. Having been diagnosed with cancer, and starting to undergo treatment, his ordeal began to shape his work.

At the exhibition there were a few not-so-subtle hints that something was up. The series of works titled “Painting at the Brink of Death,” (shown in the photo above) were positioned directly across from the entrance to the gallery and could hardly be missed. The images contained a partially obscured self-portrait with the artist’s head bowed downwards. One of the four panels revealed his recently shaved head, a preemptive first strike on a side effect of chemotherapy.

Thankfully, over the past months Simon has made a full recovery – one that we at Hong Kong Hustle are ecstatic about and grateful for.

Out of Darkness, opening at the Louis Vuitton Gallery (inside the Canton Road flagship store,) reflects Simon’s trip over the course of his illness. The show also includes photos by Wing Shya and Stanley Wong who documented his progress. The exhibition opens this Thursday, November 20th.

Simon Birch has been busy! He’s also taking part in a special group show to honor Hong Kong sculptor Antonio Mak. This exhibit includes the work of seven other artists created in response to Mak’s sculptures. For the opening, Simon’s putting on a performance art show titled “Huntingdon” that is origami related. For more information, check out the Hong Kong Museum of Art website.