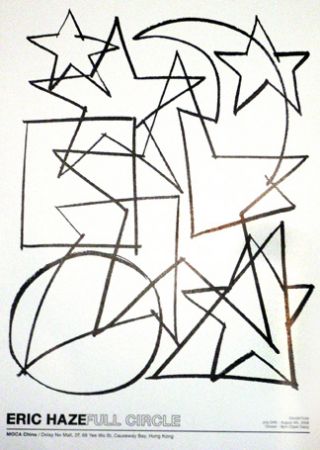 He’s back. The man behind the most recognizable logos of Hip Hop’s golden age is in Hong Kong to launch a one man show titled ERIC HAZE FULL CIRCLE. The exhibition opens on July 24th at Delay No Mall in Causeway Bay. The show runs from 12 noon until 9pm daily and ends on August 6th.

Eric Haze is no stranger to Hong Kong. What went down the last time he gave a talk in the city?

I’ve recounted this story previously. Around six years ago Eric Haze was the featured guest at an event in Times Square. After giving a talk about his career and a slide-show of his work, he wrote his signature ‘HAZE’ tag on a large white canvas and invited local artists to come up and sign their names. Iâ€™ll never forget what happened next – the first person who came up, instead of writing their own name, wrote an imitation of Haze’s tag! Thatâ€™s how pathetically ingrained the copy mentality is in Hong Kong!

Haze is known as a pioneer graffiti artist, a top notch graphic designer and a first generation streetwear clothing designer.

Among his creations are some of the most recognizable logos in Hip Hop music. His iconic work includes logos for Public Enemy, The Beastie Boys, EPMD, Tommy Boy Records, Cold Chillin Records, and L.L. Cool J, to name just a few. In Hong Kong, Eric Haze was responsible for the logo of 24 Herbs, the new music crew making noise around town.

Haze’s recent work involves a return to the basics of hand drawn art. For more background into his design philosophy, have a look at a recent post on his blog commemorating the 50th birthday of Keith Haring. It’s a fascinating and moving piece about the artist, with insight into the contemporary role of art in the commercial world we live in.