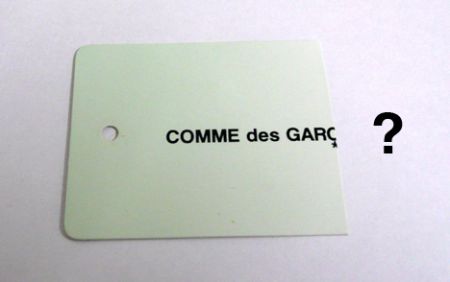 It appears that clothing counterfeiters are developing more sophisticated tastes. Instead of copying t-shirts and sweatshirts by brands such as A Bathing Ape, there’s been a trickle of fake Comme des Garcons clothing making its way into the city’s sample stores.

Earlier it was the simple PLAY line of shirts, which doesn’t require much sophistication to reproduce, however it now appears that they are copying more complex pieces from recent collections.

Among the targeted lines are the men’s patchwork series that includes fabric swatches sewn onto button-down shirts. At first glance, they’ve done a decent job. The clothing contains Comme des Garcons hang-tags and cut-out labels to make them appear like original samples, or perhaps irregulars.

The retail prices are less than one-tenth of what they would normally sell for. So, for example, a shirt that would retail for $2,600 HKD, will go for around $268 to $168 HKD! Of course, the craftsmanship and fabrics are not exactly the same, but there is a strong resemblance.

Here’s a little something extra for our French readers! 😉