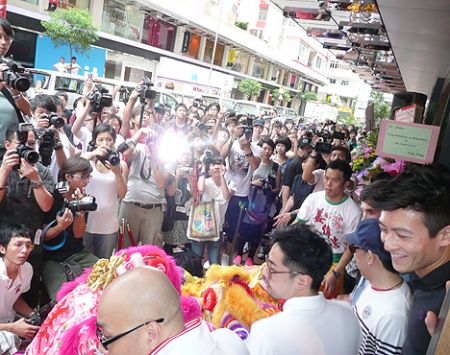 JUICE, a store we’ve covered before here and here has recently moved to a new location in Causeway Bay. The shop is the retail arm of Edison Chen’s CLOT brand, and is a Mecca for streetwear lovers due to its exclusive, limited-edition merchandise.

The store opening also coincided with CLOT’s six-year anniversary, which drew a a large amount of fashion industry insiders and press.

Though Hong Kong is already well known for fashion, CLOT helped put the city on the map for high-end streetwear. Over the years, CLOT has launched their own signature line along with a truly impressive number of collaborations. In addition to familiar names such as Nike, Levis, and Reebok, they have worked with a who’s who of sought after Japanese labels. Their latest collection continues in this vein with iconic partners including Stussy and Disney!

Which famous names in street fashion turned up for the opening?

In order to celebrate the occasion, there was a traditional lion dance performance held in front of the new ground-floor location. Major fashion figures and celebrities participated in the ceremony.

I shot a short video of the scene as the ceremony took place. On one hand I wanted to capture the celebrities assembled, on the other hand, the lion dance was really out of the ordinary, so I had a tough time deciding what to focus on! The result is a somewhat schizophrenic video. Note the height of the lion dancer on the pole – it’s rare to see the lions climb that high in Hong Kong.

The new Juice is just one block away from the previous store. The main difference here is that the new address is a ground-floor location with lots of windows facing the street. The previous shop was on the second floor of a mostly residential building and the security guard was always lazy to let people in!

The new shop makes good sense from a foot-traffic perspective. It’s situated directly across from the large, multi-brand i.t store, which does a steady amount of business with nearly the same demographic.

The interior of the new shop reminds me of the original design of JUICE, which contained lots of wood. It’s warmer, and less slick than the previous iteration.

[photopress:poon_clot_juice_hong_kong_HK.jpg,full,pp_image] Kevin Poon from CLOT (at center in white) at the opening

Congratulations to the CLOT / JUICE gang. Wishing you continued success in the new year!

[photopress:juice_clot_store_shop_Hong_Kong.jpg,full,pp_image] a few days before the new JUICE store opened…