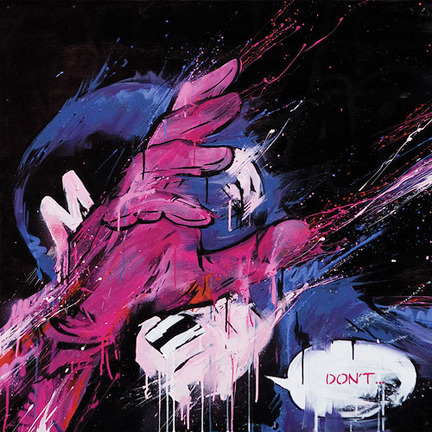 a work by MEGGS from an earlier exhibition

On Friday, July 9th, Hong Kong’s Above Second Gallery is launching an exciting solo exhibition featuring the artwork of MEGGS, a rising talent from Melbourne, Australia.

Having previously exhibited in Tokyo and London, the artist’s work often shows a masterful use of color and typography that can be traced back to influences including comic books, graffiti, and packaging design.

But there’s more to MEGGS’ work than just flashy images.

Similar to a frame in a comic book, there’s also a strong story-telling quality to his work. In his paintings, MEGGS succeeds in capturing expressive moments and conveying a split-second of action (as in the image above.)

In some ways, MEGGS, who hails from Melbourne, is a throwback to an earlier era. New York graffiti legends from the 1970’s and 80’s were heavily influenced by comic books. (We know this because cartoon characters and explosive lettering styles appeared all over the city’s subway cars during the time period!)

[photopress:meggs_art_artist_melbourne_show_exhibit.jpg,full,pp_image]
King For A Day

The subject of MEGGS’ exhibition opening on Friday, titled “King For A Day,” is a topic familiar to everyone in Hong Kong. It deals with society’s obsession with fame and celebrities. (One only needs to walk past a 7-11 here, to understand just how widespread interest in celebrity gossip is in this city.)

The exhibition is curated by May Wong, who, before co-founding Above Second, was the person behind Apostrophe Gallery.

In addition to the opening at the gallery which starts at 6pm on Friday, Above Second is also holding a superhero themed after-party. The party takes place at Roxie and goes from 10 til midnight as an invitation / guest-list only event, opening up to the public after 12. (See below for how to get on the guest list!)

The opening is Friday, July 9th starting from 6pm. The show runs until August 4th, 2010

From 10pm – 12 midnight, (open bar,) strictly by invitation only.
To get on the guest list, email: [email protected]