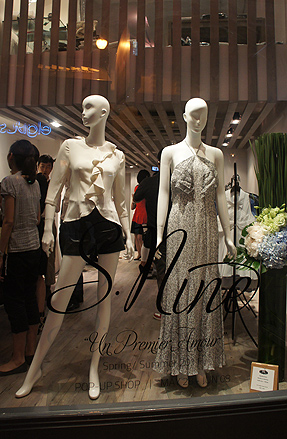 Just after a whirlwind week of art events, Friday night brought a score of fashion happenings around town. From the S.Nine pop-up shop in Soho, to Korean heat-throb Rain gracing the MCM store opening, to the glow-in-the-dark jewelry of Tom Binns, the city was buzzing with activity.

The night began on lower Elgin Street at the pop-up shop of the S.Nine brand. The N.Y. trained designer, Susanna Ngao was in attendance, presiding over the bustling store.

There was a line at the dressing room for much of the night!

The well-attended opening included goodies typically only found at luxury events, such as customized cake lollipops!

With his creations adorning high-profile individuals such as Michelle Obama, jewelry designer Tom Binns is currently gaining lots of attention. At Friday’s event, On Pedder had installed a special dark room to view the designer’s necklaces in all their glow-in-the-dark glory.

Encountering a blue-light wearing one of his pieces would definitely generate conversation!

Just down the street on Queens Road, MCM held their grand opening with Rain and Sammi Cheng doing the ribbon cutting. During the in-store event that followed, models posed in an interesting peek-a-boo routine with MCM’s signature line of monogrammed bags.