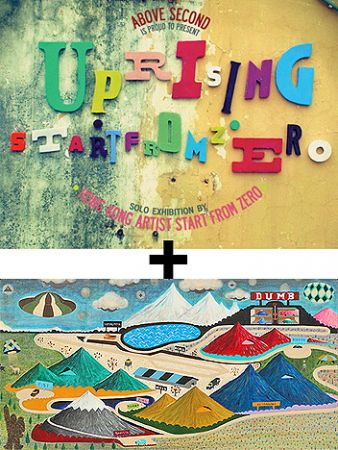 What do the bassist from LMF and a prominent street artist have in common? Both Start From Zero and Prodip have been influential figures in Hong Kong’s underground scene for over a decade, and both have art exhibits opening Friday, June 3rd!

As the number of cultural offerings continues to increase in Hong Kong, occasionally two events fall on the exact same night. Fortunately for us, the two art exhibits are located nearby!

Start From Zero comes across more like a movement rather than an individual artist. Building a presence around town for years, by stenciling, wheat-pasting, and inserting street art into relevant events such as concerts, Start From Zero has helped build a street art community and expand the scene.

Dom, the man behind Start From Zero, is both a Hong Kong street art pioneer and evangelist. In addition to opening his own underground art space, the Rat’s Cave, Start From Zero has taken over the Above Second gallery and transformed the space for the Uprising show.

Prodip – A Tribe of Many Colours

Known to most as the bassist from Hong Kong indie Rock-Rap band L.M.F., Prodip is also an accomplished graphic designer. Getting his start designing fliers for underground music events, he went on to create work for popular local and international streetwear brands.

On Friday, June 3rd, Prodip debuts his first exhibition of paintings to the public. The subject matter includes alien abductions, UFOs, and other extraterrestrial phenomenon. The venue is the same location as Simon Birch’s Laughing With A Mouth Full of Blood, and the exhibitions will run concurrently until June 19th.