Last weekend I was shocked to hear* that there’s an American Apparel store in Shenzhen. Although the Los Angeles-based company has shops in Japan and Korea, they’ve never set foot in Hong Kong.

Curious to get a closer look, I decided to head up to Shenzhen to investigate. But what I thought would be a simple trip turned into an adventure!

For those of you unfamiliar with American Apparel, they are a clothing company initially famous for their stylish, blank T-shirts. Over the years, American Apparel has cultivated a trendy, alternative image and grown from just making t-shirts, to producing a wide selection of fashionable basics. Along the way they’ve changed from being a wholesaler to a retailer and successfully transformed their clothing line into a brand.

Getting there part I: the adventure begins!

According to the map on American Apparel’s website, the store was supposed to be located close to the Shi Min Zhong Xin subway station in Shenzhen. With this in mind, it appeared to be an easy trip. I’d simply take Hong Kong’s East Rail train from Tsim Sha Tsui to Lok Ma Chau, and then transfer across the border to Shenzhen’s subway line. The Shi Min Zhong Xin station is just three stops away from the border.

There are several crossing points to enter into Shenzhen. Lo Wu is the busiest and most well known, while Lok Ma Chau is the newer and less crowded option. I’d never tried the Lok Ma Chau route before and was curious to check it out.

(Special tip: taking the East Rail from Tsim Sha Tsui East to Lok Ma Chau is relatively straightforward. One important thing to note – only some of the trains will travel to Lok Ma Chau, while most will end at Lo Wu. There are digital displays on the station platforms that clearly indicate which station the train is traveling to.)

Arriving at the Lok Ma Chau station, it was impressively clean and new. There were plenty of signs pointing the way to the Shenzhen subway. 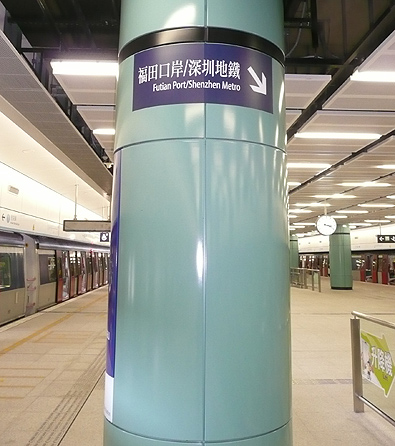 The border wasn’t crowded, but immigration was a little slow, perhaps due to a new worker, and all of the extra precautions for swine flu.

Exiting immigration, you simply follow the signs and proceed downstairs to purchase a ticket for the Shenzhen metro. The machines are simple to use, provided you have RMB in coins or small notes. They operate similar to the ticket machines in Hong Kong’s MTR system: you touch the destination and the machine tells you how much the ticket costs. 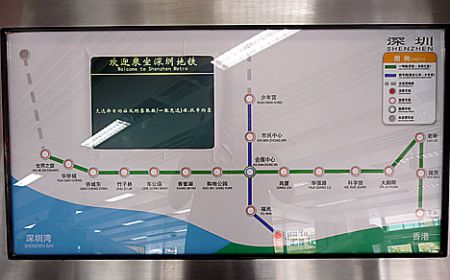 Tickets range from 2 RMB to 5 RMB, depending on the distance. There is a service counter if you need to break large bills or ask questions. (Make sure you take some RMB with you to speed things up when you arrive!)

I’ve taken the subway system in Beijing, Shanghai and Shenzhen before. All three are safe and convenient. Shenzhen’s subway is exceptionally clean and easy to use.

Judging from the map on American Apparel’s website, I only needed to take the train three stops and walk a few blocks. 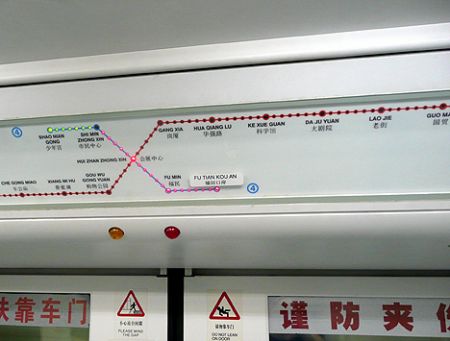 Shi Min Zhong Xin is on line 4, which is the smaller of Shenzen’s two current subway lines. The journey only took around ten minutes from Lok Ma Chau.

Exiting the station onto the street, I was standing in front of a monumental structure. Before me was Shenzhen’s impressive Civic Center. 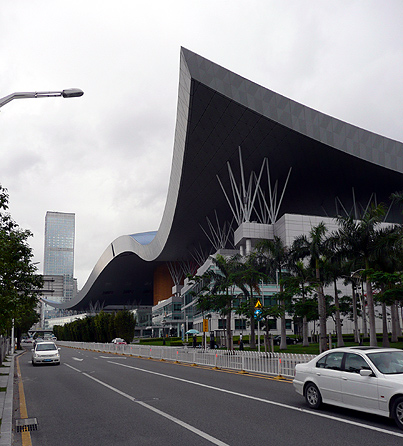 The building is a sight to behold. It’s so massive that I couldn’t even fit it into one photo! The civic center has a curved roof that extends for several blocks. As far as architecture goes, its sheer size is inspiring. 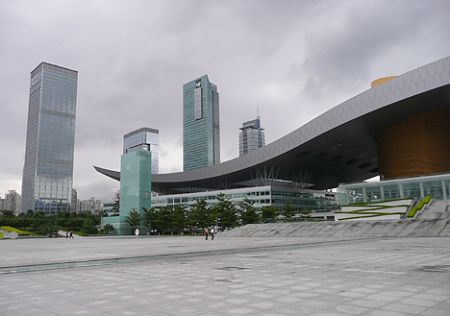 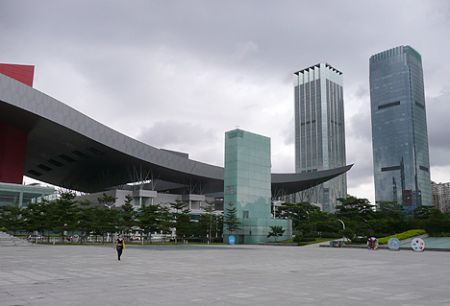 In front of it is an enormous open square surrounded by skyscrapers. (Many cities in China have these open “people’s squares,” which I suppose are used for patriotic events and celebrations. (The closest Hong Kong comes to an equivalent is Victoria Park.)

After walking around the area for thirty minutes, I realized that this was not the right place! I couldn’t find the entire shopping center, let alone the American Apparel store!

Luckily I found someone who recognized the street address and told me that it was near Lo Wu – basically, the other side of Shenzhen! I headed back towards the subway and called a friend, who confirmed that the location of the shop was indeed Guo Mao – one stop away from Lo Wu! So much for the map on American Apparel’s website!

Though I ended up in the wrong part of town, my time wasn’t completely wasted. At least I tried a new border crossing and got a good look at Shenzhen’s Civic Center.

Descending back into the subway, I traveled crosstown to Guo Mao, the second stop from Lo Wu on Shenzhen’s subway line 1. Guo Mao station is literally in the basement of King Glory Plaza, the shopping center where the store is located. Look for exit A. 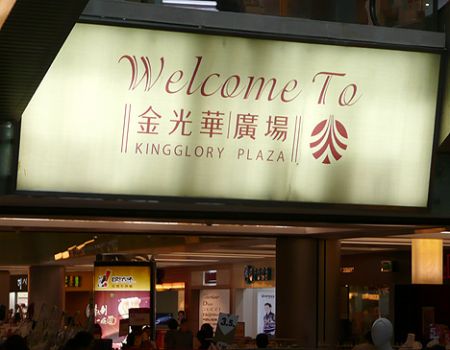 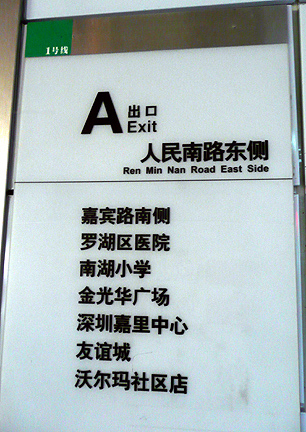 Taking the nearest escalator up, I spotted the American Apparel store, just opposite an outdoor food court. 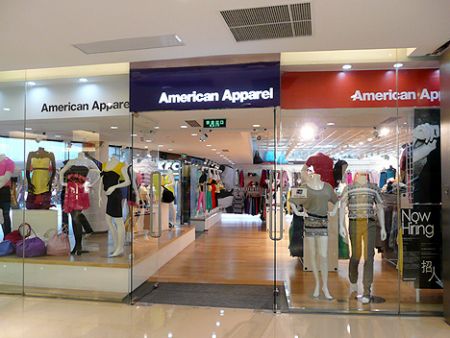 I walked into the store and took a look around. It’s a relatively large shop, similar to American Apparel stores in the U.S.

Those looking for cheaper prices normally associated with shopping in Shenzhen will be disappointed. The clothing appears to cost the same as it does in the U.S.. For simple shirts, the prices are relatively expensive.

The concept of launching American Apparel stores in China itself is interesting. Since China is the world’s low-cost producer of clothing, it means that they’re not looking to compete on price. American Apparel seems to be relying on their alternative style and image, however, I’m not sure that these two factors have the same relevance that they would say in Europe or even elsewhere in Asia (for example in the mature Japanese market.) ‘Alternative’ may not be a strong selling point in an emerging market.

On the outside of King Glory Plaza there’s a billboard where American Apparel advertises alongside older brands such as Trussardi. It will be interesting to see how they market their clothing in China. 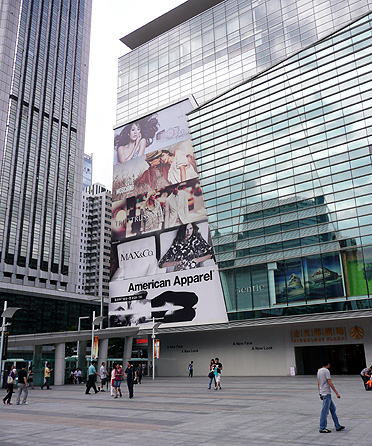 After checking out the store, (which seems practically bursting with merchandise,) I decided to explore the neighborhood a little.

Walking half a block towards Lo Wu I spotted another, perhaps, less stylish American favorite – WalMart! 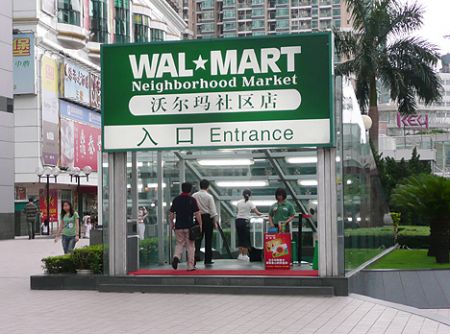 Too bad I was already shopped-out for the day.

The better way of getting to American Apparel!

Instead of going through Lok Ma Chau, cross the border at Low Wu and walk a few blocks to the Shenzhen subway (it’s near the Lo Wu Shangri La Hotel.) From there, take the train one stop to Guo Mao, and use exit A to enter King Glory Plaza. Or, spare yourself the walk and simply jump in a taxi for a short, inexpensive ride to the shopping mall.

*Thanks for the tip Alex!