Popular online fashion retailer BKRM.COM, also known as Backroom, held a launch party for their pop-up shop on Friday night that brought an overflow crowd of trendsetters to Causeway Bay.

For several hours, GUMGUMGUM on Cleveland Street was filled with the new faces of Hong Kong’s fashion scene. Young, influential locals, in all manner of dress, from self-designed outfits, to outlandish accessories converged on the shop to mingle, browse, and celebrate their passion for fashion.

Backroom has quickly made a name for itself by combining hard to find street wear labels with well known luxury brands. For example, Pigalle and BWGH, two of their staples, are part of a new crop of street wear lines coming out of Paris, yet the site also sells Fendi, Givenchy and YSL.

Backroom’s mix and match aesthetic, combining urban with luxury is reflected in the online store’s inventory as well as its editorials. On display at the pop-up however are newer labels such as BWGH, Etudes Studio, Libertine-Libertine, Pigalle, Still Good, This Is Not Clothing, and Zoologie.

Many of the menswear items are looks that can be worn either by men or women, which is another one of the themes common in Backroom’s photo shoots.

The space itself, a store called GUMGUMGUM, normally sells an eclectic blend of fashionable items mostly by Hong Kong designers. On display are everything from extremely rare Michael Lau figures and skateboard decks by Prodip Leung, to hand-painted hats.

With Causeway Bay’s rents some of the highest in the entire world, having the chance to reach consumers via a ground floor location is rare, and usually only the domain of luxury brands and well-heeled chains.

Part of the value of GUMGUMGUM is that it hosts collaborations with different groups, transforming the medium-sized lifestyle shop into a co-branded space. 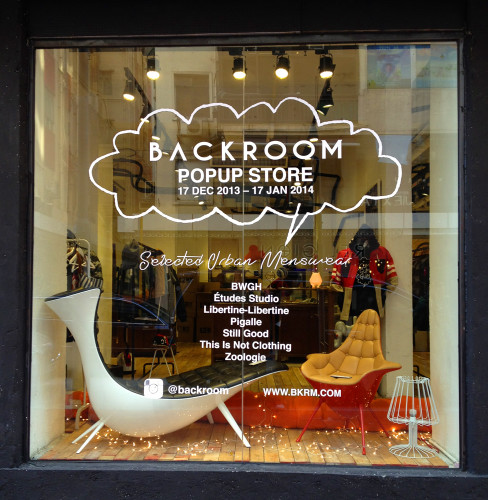 With unique offerings and savvy editorial direction, Backroom has succeeded in gaining fans from all corners of Hong Kong’s fashion landscape. The shop attracts everyone from hipsters and street wear aficionados, to socialites and celebrities.

On Friday night they all came together to check out the collections, show off their personal style, and celebrate with Backroom.

Congratulations to founders Pinky and Doris on your first anniversary and for putting on an amazing event!

If you’re in Hong Kong, the BKRM x GUMGUMGUM pop up will be open until January 17th, 2014. If you’re outside H.K., you can check out the Backroom site. 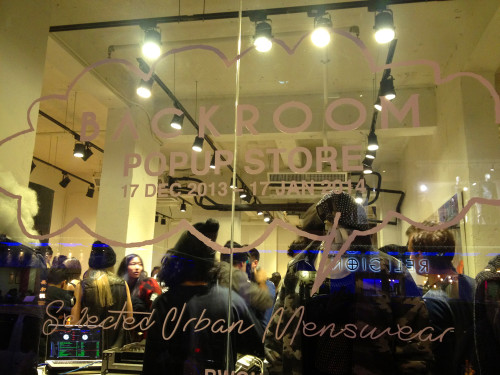