If you ask a transplanted New Yorker, what’s the best pizza in Hong Kong? They’ll surely answer: there isn’t any!

Not all pizzas were created equal
Though pizza originated in Naples, Italy, it was popularized, internationalized and significantly innovated on by Italian immigrants who settled in New York. Selling pizza by the slice for example, is a New World creation. The standard New York pizza of today is sort of a larger, more affluent cousin to the pizza from Naples.

You call that pizza?
The type of pizza offered in Hong Kong won’t even fit a New Yorker’s standard definition of pizza. If they see it, they’ll begin to rattle off a string of adjectives just to help them classify the limp, ultra-thin, Italian-style pizzas, or things like the “personal pizza”. To them, this is not real pizza.

New Yorkers think of pizza either by the pie or by the slice. Typical pies come in either small or large sizes and are at least around 18″ inches round in diameter. Slices are derived from these pies.

There’s even a special way to eat it – by folding a slice in half and holding it in one hand. Want to eat two slices at once? No problem! Have a look at John Travolta doing just that in the opening sequence of Saturday Night Fever! (Fast forward to 50 seconds if you want to skip to the point!)

The jerks took away the music… “Well, you can tell by the way I use my walk, I’m a woman’s man, no time to talk…”

While Hong Kong has numerous chains and individual restaurants that offer “pizza”, there’s not a single place in town that can satisfy your craving for a decent slice. (While a few of them look the part, they fail miserably with poor quality cheese and sauce.)

What’s the secret ingredient to New York pizza?
The judge of a real pizza is a basic Margherita slice with tomato sauce, mozzarella cheese and a little basil – none of this Peking duck or gourmet stuff. Pizza is simply dough, mozzarella cheese, tomato sauce, olive oil and a few seasonings. Again, it’s like with burgers, you don’t need all sorts of fancy stuff if you use good quality basic ingredients.

So why is it so difficult to replicate? Let’s take a step back into time. Traditionally, the pizzeria was a family business. The name of the place was usually the name of the proprietor – i.e. Sal’s, Carmine’s, Joe & Pat’s etc. No Italian wants someone saying bad things about them or their family, so they had to do a good job!

In contrast, restaurants offering Italian food in Hong Kong exist mostly as “concepts”. This means the owner is a restaurant group looking to open a new space. They don’t actually have a commitment or deep knowledge of the type of cuisine they’re offering.

I’d say that the two missing ingredients are the invisible qualities of pride and love. There’s no love or pride that goes into the pizza here. Restaurants peddling Western food such as pizza are simply broken down into a formula to make money, and as a result of that, you lose the hidden qualities that often accompany a business carrying a family name. Soho is rife with concepts that just apply the same formula to different ethnic cuisines. The result is often mediocre food, with little authenticity, and people hovering over you asking “still or sparkling?”

Pizza by the slice – the perfect urban food?
The slice actually fits Hong Kong’s on-the-run lifestyle perfectly. Like the hot-dog, it can be eaten on-the-go. To open a successful pizza place, perhaps the strategy should be re-engineered. Selling pizza by the slice in a take-away format could emulate the recent success of “bubble tea” stands, and match how places like Ireland’s Potatoes do business.

One could open up a counter in a high foot traffic location such as Causeway Bay or Mongkok, and instead of offering a sit-down, eat-in restaurant, just have take-out. If your pizza is good enough, people will drive to your restaurant just to pick up their pies. Unless you’re in a neighborhood with cheap rent, it’s hard to justify the square feet for the price of a slice. Switch to the take-away equation, and you may find an easier road to profitability.

An opportunity for entrepreneurs?
While all the copycats were busy opening up burger joints around town last year, how come no one thought to open up a new pizza place? Pizza is actually conducive to building a business around. It’s a several ingredient food, that can be broken down into a simple menu. This allows restaurateurs the ability to streamline the process, and to buy ingredients in bulk. You can also create pies that will meet multiple tastes. Toppings allow customization at the final stage and are relatively easy to do.

Slices of pizza are also marketable in ‘sets’. I can imagine something like two (real) slices and a Coke for $78 HKD.

Life without good pizza…
For people in H.K. that have been exposed to good pizza and grown accustomed to it, this is a major flaw in the city’s quality of life. In fact, there are some who say that until this pizza problem is resolved, Hong Kong can’t claim to be an international city. 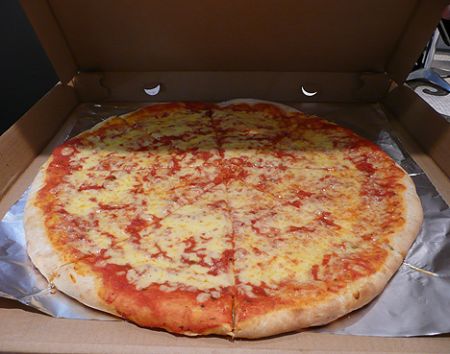