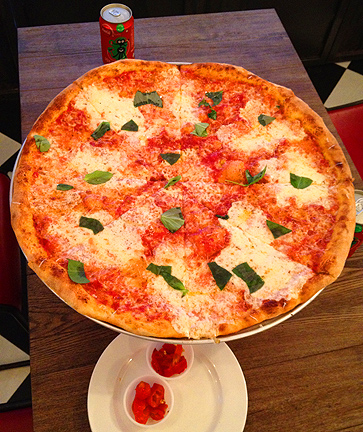 At Hong Kong Hustle we’re a bit obsessed with finding Hong Kong’s best pizza. We’ve been writing about the subject for a few years already and have discussed in great detail several of the obstacles that make good pizza hard to come by in this city.

The newest contender for Hong Kong’s best pizza is Pizzeria Pubblico, offshoot of Italian-American restaurant Posto Pubblico in Soho. The pizzeria is located just below the escalator and Staunton Street, in the thin alley alongside Pure Fitness.

For a brief history, a few years ago there were barely any options for New York style pizza by the slice. (And certainly none that could satisfy a craving!)

Over the last three years there’s been an influx of new places opening up and you can read about a few of them here and here. Two of them have expanded, Paisano’s has new branches in Wanchai, Hollywood Road, and Granville Road in TST; and Slices has branches in Causeway Bay and Happy Valley. Others have already failed or fallen off.

Pizzeria Publico is the most recent to arrive. They aim to replicate an authentic New York experience.

The biggest problem with Hong Kong also applies to pizzerias. Extremely high rents throughout the city make business much more difficult and leave little room for error. If you serve pizza by the slice it gets more complicated because you need to consider your average spend per customer. Not everyone can make the formula work.

Balancing price with location, quality, spaciousness, and atmosphere is the bane of restauranteurs in this city. Getting the formula right is partially luck as well as skill.

The interior of Pizzeria Pubblico was well conceived. As square footage is always an issue, they’ve done a solid job designing their space, which is sparse, yet warm and functional. There’s no need for corny props, and the place avoids them to good effect. There’s ample seating both indoors and outdoors. 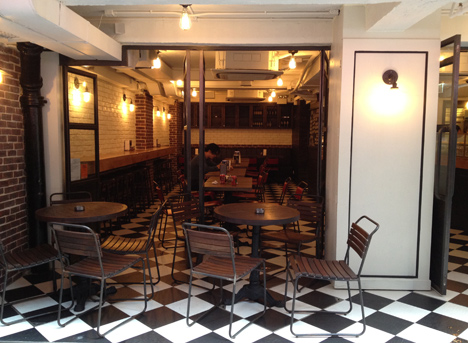 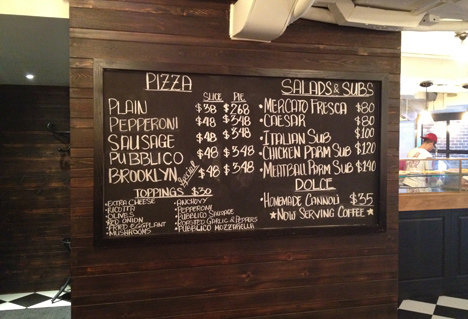 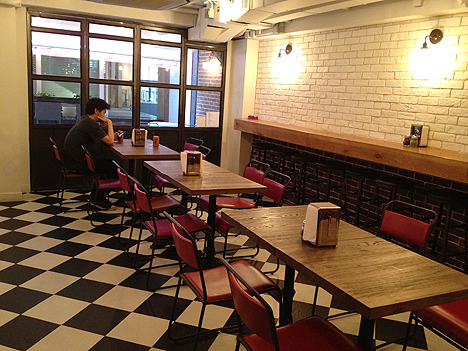 And now for the pizza… 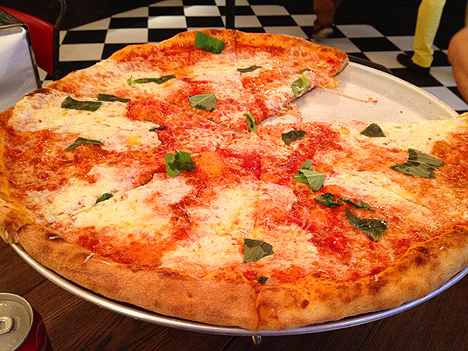 We’ve tried the pizza at Pubblico twice. The first time was a single slice that was reheated and consumed in the place. The second time we ordered a whole pie.

Experience wise, the staff was slow to take our order, which is a feat, considering that you simply order at the counter. Although not crowded, it took much longer than necessary.

(The collateral damage of Hong Kong’s high rent is that restaurants often can’t afford to attract good people. It’s one of the factors that drags down the overall dining experience in the city.)

On our second visit we ordered a pizza with extra cheese. When taking the order the staff asked “mozzarella?” to which we responded yes. Mozzarella is the cheese typically used for pizza.

When the pizza arrived however it didn’t look like extra cheese, it looked like less cheese than normal. We spoke to the staff and they explained that they have two types of cheese, a shredded cheese and a hand made cheese. Well, whatever the case was, it wasn’t extra cheese, and it was a big disappointment.

If this is a New York style place how can your staff not understand what extra cheese is?

At close to $300 HKD ($38USD) for our pie, Pizzeria Pubblico is expensive. Similar sized pizzas by their competitors are much cheaper. Quantity wise, there’s no comparison between a slice at Paisano’s and Pizzeria Pubblico. A single slice at Paisano’s is nearly twice the size of one of Pubblico’s. (Though we’re not in favor of quantity over quality.) Slice’s in Causeway Bay also sells a typical slice that’s bigger, with more cheese.

The pizza by the slice was better than the custom pie, which shouldn’t be the case. The sauce lacked a tang, there wasn’t enough cheese, and it was missing the salty flavor and elasticity of good mozzarella. The crust could have been better too, as the slice came off a little on the soggy side. The fresh basil was a nice touch though. 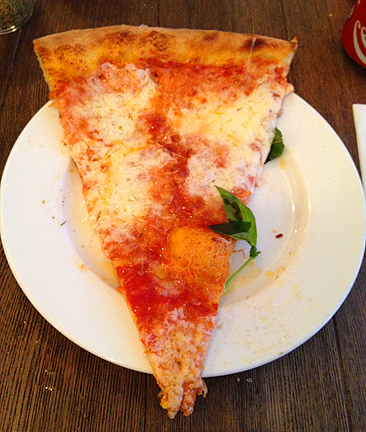 The re-heated slice we tried on our first visit was actually better.

Since it’s still relatively new, we’ll be back to try it again. Consistency is an important issue with new restaurants and it would benefit from having the founder at the place to keep an eye on things.

As it currently stands Pizzeria Pubblico doesn’t represent good value. (This is not to say that we don’t empathize with the owners for having to pay high rents.) For some reason, the prices have been raised since our first visit. Instead of $200 for a plain pizza, it’s now $268. With “extra cheese” it was $298 HKD.

Flavor wise, the first slice we had was much more like a N.Y. slice than Paisano’s. If they can continue to hone their recipe and improve the cheese situation, it could be the best option in Hong Kong.