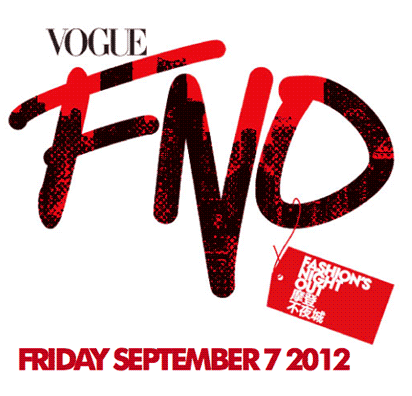 If there’s one city in the world that doesn’t need help luring shoppers into stores it’s probably Hong Kong! 😉

Fashion’s Night Out was conceived by Vogue editor-in-chief Anna Wintour in 2009 to help inject some life into the faltering fashion retail scene. The annual event has been strongly embraced and widely adopted both in the U.S. and around the world.

Heading into its fourth year, Fashion’s Night Out (abbreviated FNO,) is a major new addition to the fashion calendar. The night has evolved into a celebration of fashion that has a fun, carnival-like atmosphere, with designers, celebrities, and the public coming together to show their support and herald the new Autumn / Winter season.

Being held in Hong Kong for the first time this year, Fashion’s Night Out is presented by Vogue magazine and Lane Crawford.

Lane Crawford has already set the bar high with their previous events that pretty much cover the same territory.

As this is the first year that FNO is taking place in Hong Kong, the event is only happening at Lane Crawford locations. By contrast, in New York City in 2011, more than one thousand stores participated in Fashion’s Night Out.

If the event is a success, it would be ideal to see it extended to include Hong Kong’s indie boutiques to spread the love to some of the smaller fashion pioneers in the city. (Shops like Juice and Kapok would be a good fit.)

In Hong Kong, a precedent for a large-scale, collaborative event has already been set by the annual ArtWalk that includes over 60 participating galleries.

You can sign up for updates about the upcoming Fashion Night Out event via Lane Crawford here.

There’s even a Justin Bieber commercial!