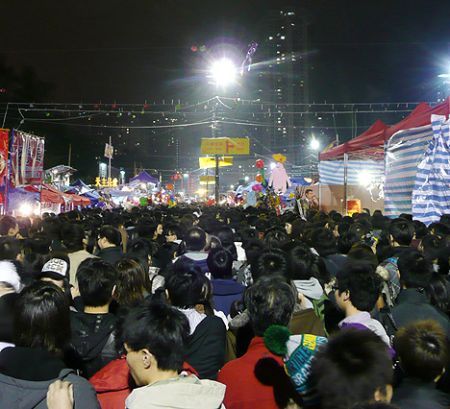 Every year well over a hundred thousand people cram into Victoria Park for the Chinese New Year fair that packs several football fields of space.

Throngs of festive revelers slowly press their way through long rows of booths, browsing and interacting with hawkers. The lively atmosphere is a unique Hong Kong experience as sellers shout and carry on, attempting to draw attention to their merchandise.

The items on sale include plants and flowers meant to bring good luck in the new year, as well as merchandise that corresponds to the coming year of the Chinese zodiac.

But other non-traditional categories also exist and are particularly popular.

Hong Kong’s penchant for things that are cute and trendy also manifests itself among the offerings. The items appear as replicas in super-sized scale, either in plush, or inflatable version.

This year there were two clear standouts. iPhone related merchandise, particularly characters from the popular game, Angry Birds, had a major presence. Plush and inflatable replicas of the Angry Birds were being sold by several different vendors throughout the market.

I would venture that per capita, Hong Kong has the highest concentration of iPhone users in the world, so an appearance here comes as no surprise.

In the cute category, snacks tend to be the biggest draw. Previous hot items have included super-sized ‘gai daan jai’ and egg tarts, (both local snacks,) as well as Chupa Chup lollipops, ice-cream bars, and even McDonald’s apple pies.

The champion of cute this year was the giant meter-high bubble tea (aka ‘jun ju lai cha’ aka Taiwan style milk tea with tapioca pearls!)

Popular ten years ago, the bubble tea places made a resurgence in the city in 2010. (Of course Hong Kong Hustle was on to this trend in 2009!)

Wishing you all the very best in the year of the rabbit! Kung Hei Fat Choy!