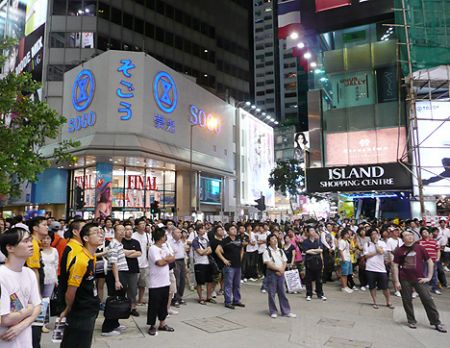 Who says Hong Kong doesn’t care about the Olympic games? Though the special administrative region sent its own separate delegation of athletes to the Olympics, Hong Kong people are proud of the grand opening ceremony and the chance to participate by hosting the Olympic equestrian events.

Saturday night foot traffic at Hong Kong’s busiest intersection slowed to a crawl as passersby paused to catch team China participate in an event. All over the city, screens from Jumbotrons down to those inside elevators were tuned to the games.

As pedestrians stopped to watch an event, a large Nike Olympic billboard loomed over the famous intersection that separates the two main sides of Causeway Bay.