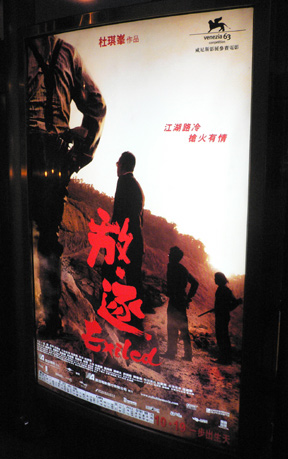 Last night I went half-way around the west side of Hong Kong Island to a development called the Cyberport to check out a film. Launched during the height of Internet-mania, the Cyberport was supposed to be Hong Kong’s Silicon Valley, or at the very least an I.T. hub, but for years it’s struggled to get off the ground. Located on a huge parcel of oceanfront property it very well may pay off, but more for its luxury apartments and the adjacent shopping center.

For a city dweller like me, walking the grounds of the Cyberport is actually scary because the place is so unpopulated compared to the rest of Hong Kong. Anyway, they have a large multiplex there and it’s a good spot if you’re trying to stay incognito or want to get a good seat! In my case, the film’s been out for a while and wasn’t playing near me, so it was one of my closest options!

Exiled, Johnnie To’s new film revisits Macau as a setting. His previous film from 1999, Where A Good Man Goes, starring Lau Ching Wan and Leon Lai Ming was also set in the enclave. This time around he put together the usual posse, Anthony Wong, Francis Ng, Lam Suet, Roy Cheung, and Nicky Cheung in addition to Josie Ho.

My initial reaction watching Exiled was the same that I had when I saw Wong Kar Wai’s In The Mood For Love. It’s a director revisiting his signature topics, using his special devices perhaps to the point where it’s too straightforward and it becomes a bullet point list of the director’s techniques displayed. What’s sacraficed is the of elegance of storytelling – letting those devices unfold naturally within the film – which is often what made them special to begin with. In places, this film is Johnnie To doing Johnnie To.

In two particular scenes of mass gunplay, however, it’s Johnnie To doing John Woo, which was kind of cool. I’m sure he did this as an homage, though it doesn’t come off quite as suspenseful or as elegant as the older films in its cinematography and action sequencing. (One interesting unifier on this note is the fact that Simon Yam, who guest stars in Exiled, also appeared in Woo’s masterpiece A Bullet In The Head.)

All the performances in the film are strong, although I think Mr.To should leave Nicky Cheung out of the equation next time. He simply isn’t as interesting as the others as a character actor. His face just doesn’t hold as much intrigue or personality as the others. His role in To’s Election series also suffers from his rather flat presence.

Despite the negitives I’ve mentioned above, the film is certainly entertaining as a contemporary quirky action film – which is what it seems intended to be. I believe it may even win Johnnie To a wider audience. But for someone who has seen most of his films it comes off a little self-concious and calculating compared with the mythic storytelling of some of his earlier works.