After checking out the band show on Friday night, I hopped into a taxi and headed up to The Peak, Hong Kong’s most famous scenic spot. The newly renovated Peak Tower was the site for Electronic Art’s event – a launch party for the new EA showroom and store.

CLOT, the multifaceted branding crew were the organizers of the event. EA certainly chose the right partner to handle the party. CLOT has been on a rampage lately, with projects ranging from launching a much sought after shoe with Nike to bringing Kanye West to perform in Hong Kong at the end of the month. The thing I like about CLOT is that they have vision and put their connections to good use. More than that, their events are always fun. It’s a win-win situation, people attending their events go away with a good time and sponsors are happy (well, except for time we were drinking Moet in the beer bong, but that’s another story!) 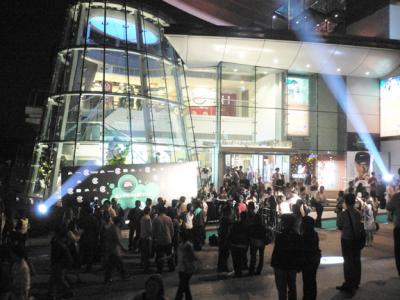 When I got to the Peak Tower the place was bathed in spot lights with a large marquee set up near the entrance. The building itself is interesting. It’s shaped like a partial elipse. 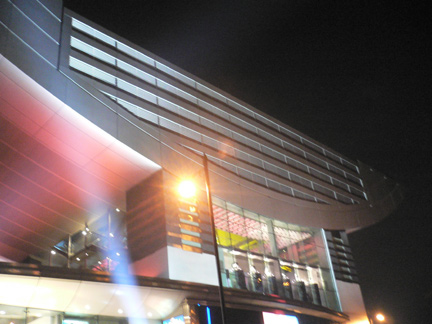 Over the last year, the place has been completely redone, making room for more new shops, including the EA store. The Peak Tower also houses the terminal for the Peak Tram, a main tourist attraction that takes you straight up the steep hillside. On the large rooftop of the Peak Tower is an observation deck that offers amazing views of the city. I didn’t know it at the time, but the party was located on the newly renovated roof!

After walking into the building, I took several escalators up to the rooftop. On the way up, I passed by the new EA store which was intriguing. Occupying two floors, it has an atrium-like wall of lights and around thirty gaming stations where visitors can sit and try out the latest EA titles. The place is divided into sub-sections which makes it more exciting to walk around and explore. 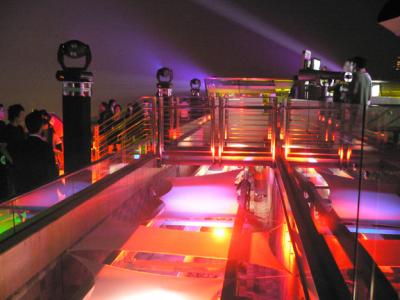 The renovated rooftop was much better than before. The entire roof is now accessible, as opposed to only half under the old design. Installed around the lengthy space are high-powered binoculars allowing tourists to focus in on the buildings below. For the night, the rooftop was also sprinkled with XBox 360’s outfitted with EA games. The space was divided into two sections, a VIP area and a normal side. Although a little hazy out, the view from the roof was spectacular. Click these thumbnails to see a bigger view. 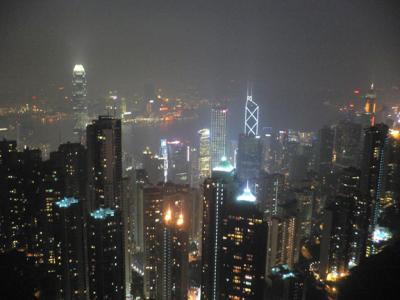 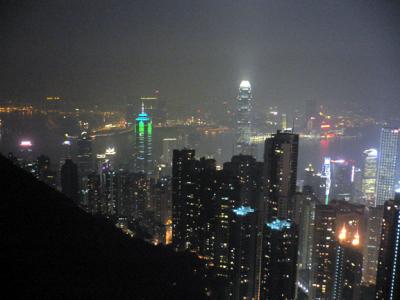 The night’s decorations weren’t limited to the immediate grounds. Residents of The Peak, Hong Kong’s wealthiest address (and one of the most affluent neighborhoods in the world) were in for a shock as they returned home from dinner to find a huge logo of the branding group CLOT projected onto their mountainside! Actually, the light alternated between the EA logo and the CLOT symbol. One word: impressive!

Hong Kong’s famous D.J. Tommy was the first act of the night, spinning from an elevated platform just above a huge screen showing clips from different EA games. Later in the night N.Y.’s Just Blaze, one of the top producers in Hip Hop music would take over the decks. This would make Just Blaze’s third appearance in Hong Kong in the last year. He’s been here previously for the CLOT anniversary party and for a Diesel event as well. 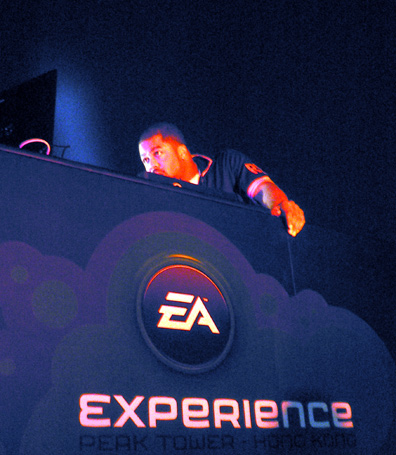 The party was packed by eleven. Bottles of Moet and Hennessy were everywhere. It was a tough night to not indulge! 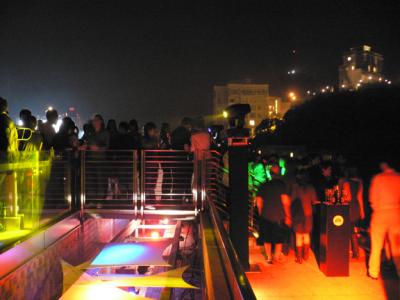 Towards the end of the night I went downstairs for a closer look at the EA shop. There were groups of people hanging out playing the games. 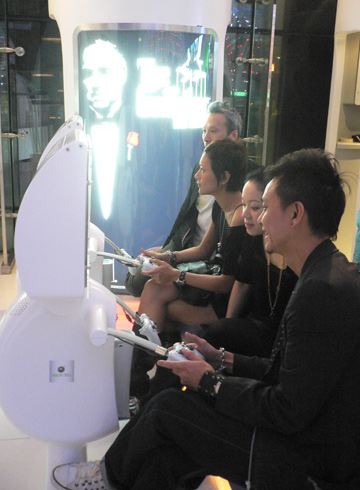 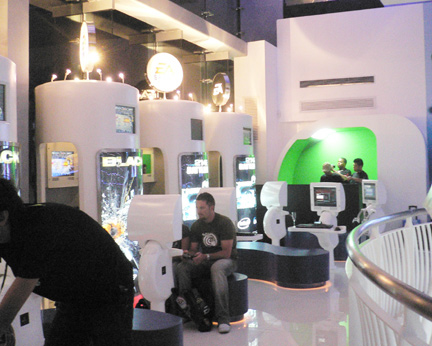 The police put an end to music on the rooftop, so the party eventually moved downstairs to the EA store. During the transition I had a chance to talk with Just Blaze about the old days of N.Y. Hip Hop radio – and he actually burned me a CD of a long lost show! I hope I can repay his generosity some day.

The Electronic Arts event was yet another in a string of memorable parties by CLOT. Despite all the planning, the CLOT events wouldn’t be a success without this guy, codename: Cobra, he even smiled for the photo! 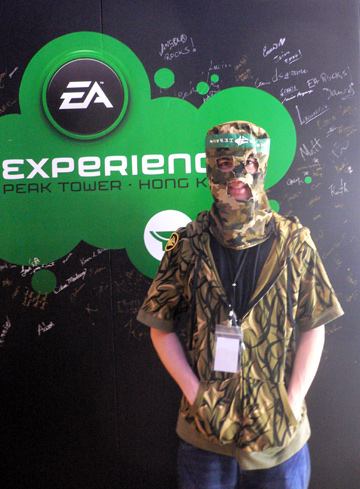