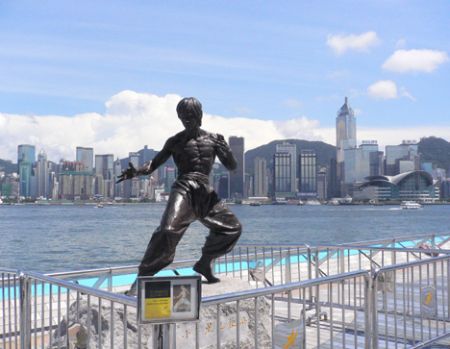 I’ll let you in on a little secret: growing up watching Shaw Brothers and Golden Harvest kung fu films every Saturday is one of the reasons I live in Hong Kong today!

The long and winding path that led me to Hong Kong is actually film related. The steps along the way included volunteering for the Hawaii International Film Festival, talking flying guillotines with America’s top film scholar, David Bordwell, and founding Subway Cinema (the number one showcase for Asian films in the U.S.) in 1999.

I was reminded of all this Sunday when I met up with Ryan, my first friend in H.K.. Ryan’s been the dominant force in providing free information about Hong Kong movies over the Internet for an entire decade!

My quest for more information about Hong Kong films
Allow me to reminisce a little… back in the old days there was no information about Hong Kong movies available in English. After getting hooked on Hong Kong cinema in the U.S. as a kid, by the late 80’s the movies virtually disappeared. It was a real struggle to locate reviews or info of any kind. Many years later, when the Internet started to catch on, it allowed people from all over the world to share information on subjects not covered by the mainstream media. Hong Kong cinema proved to be a great example of this theory in action.

Newsgroups on the Net were one early source of info. Personally I was never into newsgroups with their weird long addresses such as: alt.asian.movies… yet the writing you could find online was excellent and far more extensive than what was available in print.

Long before academics got into writing about Hong Kong films, first generation fans (from the early days of kung fu theaters in the U.S.) kept the movies alive. These fans did the detective work of tracking down movies in small, non-English speaking Chinatown video stores. Keith Allison, deserves special mention for his work putting together an early Shaw Brothers FAQ.

In 1996 a watershed event occurred when Stefan Hammond and Mike Wilkins released the provocatively titled book “Sex and Zen & A Bullet In the Head.” Packed with insights, information and humor, the book captured the spirit that drove the legions of first generation Hong Kong movie fans to seedy theaters and on to scouring shops searching for more. The book contained priceless information not only on kung fu films, but branched out to include multiple Hong Kong movie genres, often serving as an introduction for English language readers. By including a list of popular film titles in Chinese, the landmark book aided many fans (including myself,) in locating films previously un-discoverable by their English name. Bey Logan, (now an executive with the Weinstein Company,) is another name who deserves credit for releasing an excellent book on H.K. martial arts films during the dark days, when little information was available in English.

If they’re good enough for Tarantino and Scorcese, they’re good enough for you!
With all the noise surrounding the Hong Kong film Infernal Affairs remade into The Departed, it’s a good time to dig a little deeper to discover the Hong Kong movies that have influenced scores of high-profile directors. You may be surprised to find that even some of your Hollywood favorites owe a debt to H.K. cinema.

To help you sift through the films and locate the gems, have a look at some of the information available online. Now a days there are scores of notable H.K. film sites in English to aid you in your quest, but this wasn’t always the case.

A quick history of Hong Kong movies on the web
When the Internet first came into play, (and we’re talking the early days of Netscape here!) one excellent resource that popped up was Joseph Fierro’s database of Hong Kong movie titles, famously hosted on a server out of Stanford University.

After working on his own site (Movieworld Hong Kong,) my friend Ryan, a local Hong Kong film fanatic, subsequently took over Joseph’s database and developed it further. What came next was Ryan’s second site, the Hong Kong Movie Database – still the measuring stick by which all Hong Kong film sites are rated.

Since then, Ryan has branched out to create the number one Chinese language site about Korean films. His newest venture, a mere one month old, is a Chinese language blog about Hong Kong films and culture that he updates three times a day! (I wish I could do that!)

Another good place to look for English language Hong Kong movie resources was my friend Tim’s site Kowloonside (now defunct!). For quick, up-to-date reviews you can also have a look at Love HK Film.

Browse these sites and see if you don’t get hooked!