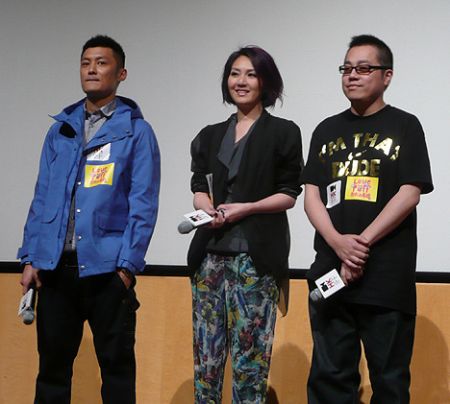 Every decade seems to bring new challenges to the Hong Kong film industry. Over the years there’s been lots of talk of the industry dying out completely. In the most recent threat, local film companies have turned their backs on the comparatively tiny Hong Kong market and have instead set their sights on the blossoming Mainland box office.

By focusing on making films for outside audiences, recent movies have lacked the local feel of previous generations of H.K. productions.

But just over a week into the 34th Hong Kong International Film Festival, I’ve caught four movies that point in quite the opposite direction. Could it be that Hong Kong cinema is making a come back?

During the Hong Kong International Film Festival and Filmart last week, I was able to preview a diverse group of Hong Kong movies that will soon be opening in theaters. The films span multiple genres including action, comedy, and romance.

Here’s a quick rundown of what I caught and why they are notable. No spoilers!

I wasn’t expecting much walking into this one. It appeared to be just another police story. In fact, I even contemplated watching a different film that was showing at the same time.

I’m extremely happy I decided to stay. The opening sequence alone totally knocked me out! I haven’t had a cinematic experience like that in ages. For me, the first few minutes of this film were more innovative than any of the 3-D chicanery in movies like Avatar and Alice in Wonderland.

What followed was a fast-paced action film starring Leon Lai and Richie Ren. The movie features Leon’s best acting in years, along with some mind-blowing action sequences. I recommend Fire of Conscience for long-time fans of Hong Kong cinema that have abandoned the films in recent years. Be sure to watch this one on the big screen!

In the quest for making universal films, one thing that’s been lacking in Hong Kong cinema lately are movies are about average Hong Kong people. (One could argue that the city itself seems increasingly out of touch with the lives of normal people…)

As theatergoers we’ve had to be satisfied with stories about warriors from ancient China or famous kung fu masters. In contrast, Crossing Hennessy is a love story about normal, working class people, which makes it exceptional. The movie exhibits archetypal Hong Kong personalities and an excellent performance by lead actress Tang Wei.

Break Up Club
Although I’m not much of a fan of movie-within-a-movie plots, Break Up Club handles the jumble elegantly, and coaxes solid performances out of leads Jaycee Chan and Fiona Sit.

Love In A Puff
Director Pang Ho Cheung’s latest film uses pick-up sidewalk smoking sessions as a springboard for different kinds of storytelling. The film has some great gags and is laced with Hong Kong-style humor. Starring Shawn Yue and Miriam Yeung, Love In A Puff features carefully crafted jokes and a few interesting twists.