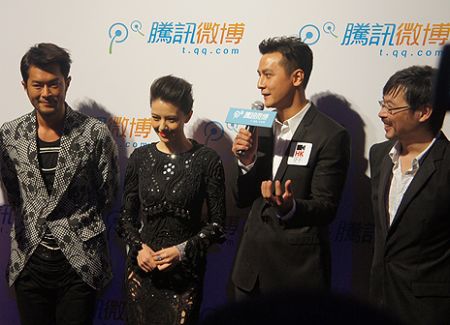 While the film is solid and enjoyable (see the review below,) the big story here is the fact that it’s in Mandarin, starring Hong Kong stars, in a Hong Kong setting, by a Hong Kong director (Johnnie To.) After over 25 years of Cantonese-language dominance, is Hong Kong cinema about to return to its Mandarin-language past?

Even at the opening reception, there were signs of change. Part of the actors time was devoted to a QQ backdrop and Mandarin-language interview session. If you quickly consider it from the film company’s point of view – would you rather sell to an audience of 7 million or 1 billion? Long gone are the days that the Hong Kong entertainment industry can rely solely on the local, and overseas Chinese markets.

For years the Mainland market was negligible. However, now China has a vast (and growing) theater network, as well as a clear path to screen more Hong Kong films. (Previously, Hong Kong movies were considered foreign films, and faced murky rules in order to enter the market.)

While last year had a strong showing of very local H.K. productions, the trend may again be reversing. If Don’t Go Breaking My Heart is a success with Mainland audiences, it may trigger a new fragmentation of the Hong Kong industry, creating a string of local Mandarin-language productions.

Don’t Go Breaking My Heart revolves around a female lead played by Gao Yuanyuan, who must decide between two men (Daniel Wu and Louis Koo,) each with different strengths and abilities to commit. The film delivers genuine laughs and builds the audience’s empathy towards the characters without ever veering into sappy territory. There are numerous amusing gags as the duo competes for attention. Solid performances and ingenuity make it an entertaining romantic comedy.