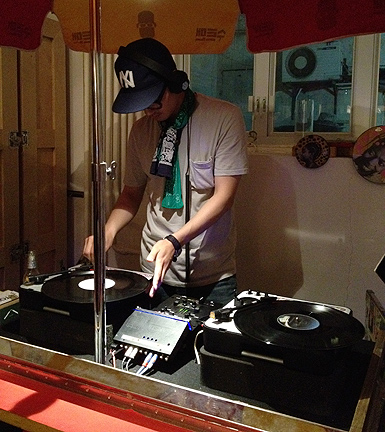 I think it’s safe to say that no one’s ever heard a set of Korean Psychedelic music in Hong Kong before last Friday night. As usual, the place to be wasn’t a big club, or trendy lounge, but one of the secrets of Hong Kong’s indie shopping landscape, Kapok.

We covered Kapok back when they were on Dragon Road in Tin Hau. Since then they’ve relocated and expanded, helping to transform St. Francis Yard into a cool place, years before Monocle and F.I.L. arrived.

In 2009 Kapok also opened a branch on neighboring Sun Street, one of the small alleys tucked away in the Star Street area.

The trippy quality to the music was enhanced by Suitman’s mobile disco soundsytem, which somehow found its way into the back of the store.

Suitman was also in attendance watching over his creation in addition to chatting with friends.

The several hour affair attracted fans of the store as well as friends from the neighborhood and beyond. Kapok has a true commitment to Hong Kong that differentiates it from other shops around town. Over the years they have worked tirelessly to showcase local artists and brands, just as much as international ones.

Not only are their selections intriguing, but they are always ahead of the curve. Beloved for both their music and fashion picks, Kapok has been introducing new brands to Hong Kong well before they get picked up by the city’s big retailers.

(Also check out their shop at 5 St. Francis Yard, nearby!)